Chinese Workers Are Revolting – Part One

Chinese Workers Are Revolting, to paraphrase a section headline in an Economist article last week. And no the article was not covering hairstyles, couture or personal hygiene, it was covering the growing willingness of Chinese workers to take to the streets or at least to shut down lines and strike to get their demands met. In a country where there are no formal trade unions, organized strikes have only recently become a significant development, but significant they are now, the country’s courts handled 280,000 labor disputes in 2008 and the article said disputes were 30% higher in the first half of 2009. The recent case of the striking Honda workers is only the most high profile of a growing trend in workers demanding better pay and conditions. Almost certainly because the Honda plant is a foreign owned enterprise the authorities have allowed the dispute to run its course, if it was a state owned enterprise riot police would have been called in long ago to settle matters with batons but traditional Chinese strike resolution methods have not slowed the rise in protests. Some put it down to the one child per family rule giving rise to a generation of spoiled children used to getting their own way. But more realistically, it is a realization that the source of China’s industrial success, cheap labor, has been getting a raw deal out of the country’s great leap forward. Workers are less willing to be the sweat shop of the world and are becoming more demanding as labor becomes tight in the high growth eastern coastal states around Beijing, the Yangzi river delta around Shanghai and the Pearl River delta encompassing Shenzhen in the south.

China had the world’s largest manufacturing workforce at the end of 2006, and it has grown since then according to Erin Lett, formerly of America’s Bureau of Labour Statistics, and Judith Banister of the Conference Board quoted in the article. They include enterprises in China’s towns and villages, where 70% of its metal-bashers work. This workforce is still cheap, costing $0.81 an hour, by the authors’ estimates, or just 2.7% of the cost of their American counterparts.

But it is not as cheap as it was. Workers’ compensation rose by more than 9% a year in dollar terms from 2002 to 2006, according to Ms Lett and Ms Banister, and by over 11% in the cities. Chinese workers in the cities at least are as expensive as those in Thailand or the Philippines and as this graph from The Atlantic adjusted for PPP shows, much higher than other Asian competitors. 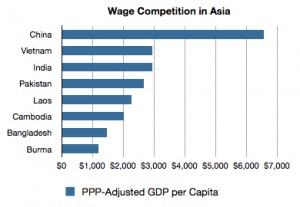 Arguably though manufacturing in China still has considerable room for productivity improvement, negating some of the impact of higher wages. Manufacturing in China, particularly in small to medium sized enterprises (SME’s) has traditionally substituted labor for capital investment in automation, by reversing that process rising wages could be negated for a number of years. Even in the last decade this was evident in larger enterprises, from 1995 to 2004 labor costs in China’s bigger firms tripled but labor productivity quintupled, resulting in a 43% fall in unit labor costs over the period.

This productivity improvement has faltered in the last two years as the following graph shows.

But at the same time, the competition have their problems. Vietnam may be cheap but their pool of labor is limited. There were only 86 million people in Vietnam in 2008 according to the World Bank about the same as Sichuan province alone in western China. Worker unrest is growing even faster in Vietnam than in China, urged on by a still traditional communist government decree that workers should receive double digit pay rises.

Part two will explore some of China’s options in the year ahead.