Home | Ferrous Metals | USW Brokers Deal in US For China Turbine Manufacturer – Good for US Manufacturing?

USW Brokers Deal in US For China Turbine Manufacturer – Good for US Manufacturing?

Whether one supports labor unions or not, in the case of ensuring China plays by the rules, the USW scored a big victory for American manufacturing. In a press release released last week by the USW, two Chinese power generation companies involved in a project to build a Texas wind farm will source 50,000 tons of steel from US producers as well as ” work together on all aspects of the companies’ U.S. market strategiesâ€including manufacturing, assembly, component sourcing, distribution and wind energy project development, according to the AFL-CIO blog site. Enlisting the support of US Senators, Charles Schumer (D-NY) and Sherrod Brown (D-OH), the USW made the case that federal stimulus dollars should not go toward imports from China when the US needs to build its own wind energy supply chain.

This solution came as a result of public outrage that only 30 U.S. jobs would be generated from a $1.5b Texas wind farm project while 2000 jobs would go to workers in China. Senator Schumer sought to block the funding from President Obama by arguing that the jobs should go to US workers. The US jobs would go to   union workers and the Texas project is expected to receive federal stimulus dollars.

In a related story, the US Department of Energy published its first wind technologies market analysis. It’s a must-read for any firm involved in the wind power industry. The report covers a wide range of topics. We found several aspects of the research interesting including the US market shares of each of the leading turbine manufacturers GE remained as the top producer with a 40% market share followed by Vestas at 15%, Siemens at 12%, Mitsubishi at 8%, Suzlon at 7%, Clipper and Gamesa at 6% each. In addition, the overall import share of turbine costs has steadily declined (see chart below): 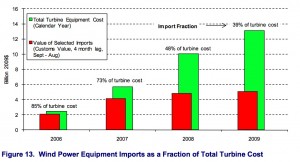 Without commenting on the wind energy industry specifically, we find the USW deal interesting for a number of reasons.

First and perhaps most important, this deal provides an example of how US policy makers can work for the benefit of both US and Chinese private industry to create win-win solutions for everyone. See Stuart’s post yesterday regarding state industrial policy intervention.

Second, unlike other deals, the Chinese companies involved in this Texas project are not state-owned entities. One of the two firms is A-Power Energy Generation Systems Ltd., a Nasdaq-listed (ticker: APWR) alternative energy company based in Shenyang, according to its website. The second company, SPG is a renewable energy industry alliance based in Shenyang, China. SPG’s member companies range from power equipment makers to engineering service providers, including A-Power. The United States Renewable Energy Group is a U.S.-based private equity firm that mobilizes and facilitates the participation of international financing and investment in large-scale renewable energy projects within the United States, according to the press release.

Third, US companies have been shut out of Chinese government procurement contracts, in some cases due to inane rules that have impacted US wind energy sector manufacturers. Does GE for example, have the same opportunity within China that these Chinese firms now have in the US?

That gets us back to the larger issue with China are we all playing by the same rulebook? We’d venture to say no but we’re impressed with how the USW brokered this deal.

PREVIOUS POST:
Rio Alcan May Sell AEP-Pechiney to an Alliance of Private Equity and the French State
NEXT POST:
Mass Market Electric Cars Finally Due for Launch