According to a Reuters article, China is on track to produce a staggering 600 million metric tons of steel this year, up from last year’s record 568 million metric tons and six times larger than the number two producer Japan. The worry is the market may not be there to take it. China’s steel mills appear to be churning out steel more in a fight for market share than to meet buyers demands. The big state steel mills in particular are the most reluctant to cut production fearing they will lose market share to competitors, so instead they are cutting prices just as the third quarter contract iron ore prices rises hit the balance sheet, pushing up raw material costs.

Output in the first half of 2010 surged 21% to 323 million tons and output in July fell only 3.7% to 51.74 million tons, still above a 600 million ton annual average. In the meantime, Shan Shanghua, secretary general of China’s Iron & Steel Association CISA is quoted as saying, “we will see the market busy with de-stocking in this half (H2, 2010) and a lot of small mills will shut down.”   Profits at the major steel mills fell 37.8% in June on the month and are expected to drop further in July. In fact other sources are quoted as saying at current prices perhaps only Baosteel will eke out a thin profit, the rest will be in a loss making position. Recent stockpiles have increased by 39% since the beginning of the year to 10.3 million tons at the end of June. 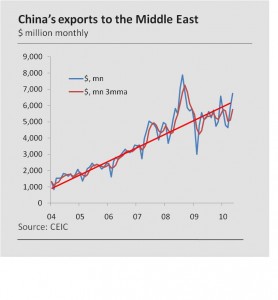 At the same time, exports are rising and western steel companies are finding themselves under pressure. Chinese exports to the Middle East are rising again as the   Silk Road Economy blog describes, graph courtesy of SRE.

SteelOrbis reported that China’s steel exports were up massively in the first half of this year, by 15.25 million tons or 153% year over year but also quoted CISA’s expectation that the change in export rebates may limit second half exports of low value steel items. Conversely this could encourage exports of higher value steel items that are right in the sweet spot of western producers.

Meanwhile the market is well ahead of developments. Share prices of Chinese steel mills have already dropped more than the 19.6% fall in the Shanghai Composite. Shares of Baosteel and Angang Group have both fallen by more than a third since the beginning of the year, while those of Wuhan Iron and Steel have almost halved.

With the removal of export rebates supposedly hindering exports, at least of lower value volume items, rising stocks and a softening domestic market, China’s steel mills have to cut capacity before a chronic rise in inventory pushes prices even further into the red. It would seem even in centrally controlled China, Beijing is not able to control the state steel mills as it would like. With such a lack of discipline, prices could fall further and then export rebates or not, more metal will come onto the world market.