I suppose 220 jobs are better than none, but the balance 780 workers who lost their jobs when Tata Steel’s Corus division closed the Redcar steelworks in the UK last year could be forgiven for wondering if this isn’t just a sop to local interests which have lobbied hard to have the plant kept open. As the Guardian newspaper reports, the plant became uneconomic when a consortium of international investors pulled out of a 10 year contract. Since then the plant has been under the threat of closure as Tata has struggled to find either a buyer for the plants steel or a buyer for the plant itself. Although steel has been made on the site for 170 years there is not sufficient demand in Europe for the mills products and relying on imported iron ore and coal, with a UK cost structure, makes the Redcar mill uneconomic on the global stage. Thai investors SSI have been in negotiations for months but closing a deal is probably based on all kinds of subsidies and support that no one is willing to give.

So where are the 220 jobs to come from? In a politicians dream of renewable energy rising phoenix like from the ashes of an old world industrial wasteland, Corus is to build a £31.5m (US$50m) off shore wind farm construction business on the Teeside site. The new facility will need space as the latest generation of offshore wind turbines and in particular the towers on which they stand are vast, but Redcar has 3,000 acres so even in the unlikely event SSI can be persuaded to take the steel mill space will not be a problem. Nor is a viable market likely to be a problem, as this article reports the UK is the world’s largest off shore wind turbine market with hugely ambitious plans to ramp up generating capacity in the future. In a gallant effort to make them remotely economic British designers are developing ever larger and more sophisticated designs such as this 10MW design called Aerogenerator X being developed by Arup in the UK. 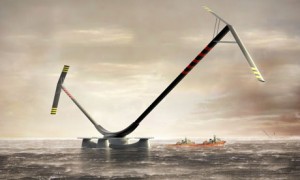 As the following map shows the UK’s plans for new offshore wind farms are spread all round the country and although currently based on 3-5MW designs it is believed in only a couple of years we will see 9-10MW structures being built in a program that could amount to $75bn of investment.

The first 25,000 MW were awarded earlier this year and more will follow, particularly if designers can improve the economics with new or larger designs.

So although Corus failed to secure direct government financial support to keep the steel mill going they have maintained both a presence and a viable business on the Redcar site via indirect subsidies in the form of supply to the wind-power market. The attraction for the politicians is this subsidy comes from electricity users not from the government treasury.