A remarkably bullish view of metals prices in 2012 is being put forward by Michael Shillaker, a metals and mining analyst at Credit Suisse, and reported in a Financial Times article. Mr. Shillaker feels the market is unduly focused on near-term slowing in China and the rest of the world when, in his opinion, China has merely bottomed out from the government enforced cooling cycle and the economy will start to accelerate again from the end of this year and throughout 2011.

Looking as much at shares as metal prices, although obviously the two are linked, he says the Chinese economy will be the next catalyst for the out-performance of mining shares, similar to those witnessed in 2001, 2005, 2007 and 2009. Not only will China increase demand through 2011 and into 2012, but demand “normalization in the rest of the world will add fuel to the fire. “We still think that copper will reach $10,000 a ton by 2012 and relatively simple supply-demand analysis supports this, he said. Including iron ore and coal in his discussion, Mr. Shillaker predicted share prices have considerable upside potential. “We believe there is 30 percent upside potential to current share prices for the miners into year-end and in some cases potentially more than 100 percent upside over the next two to three years, he is quoted as saying.

We are not sure we are that bullish across all metals. Copper demand fundamentals appear quite sound on the face of it. 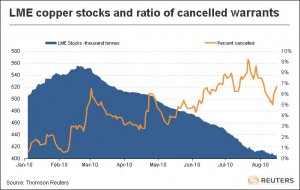 Copper inventory has been falling for much of this year as this Reuters graph shows, even though this is usually the cyclical summer re-stocking period. The same article looks at the recent trend of falling Comex stocks in the US market which suggested the trend has already caught the attention of investment bank analysts, many of whom are now advising clients to look through the broader “risk on-risk off” macro trading picture and take strategic long positions to capitalize on the improving micro dynamics of the copper market. Analyst speak for “get over the short term worries and focus on the longer term” much as Mr. Shillaker is suggesting.

Other metals do not share the same robust fundamentals as copper, so although both equity and commodity markets are showing a lot of correlation, this is likely to be a temporary alignment and given some months and a return of risk appetite, those metals with the better supply-demand fundamentals such as copper, nickel and dare we say even aluminum, looking further out, will reassert themselves.