What's Going on With Aluminum Premiums?

Metal is flooding onto the LME as if it’s being panic dumped and yet physical premiums are rising and the near term one month price is in backwardation. To understand what is going on we have to back track a little over recent months.

It is common knowledge that although LME aluminum stocks stand at some 4.47 million tons and that wider industry inventories as measured by the IAI stand at some 2.2 million tons, making the total nearly 6.7 million tons, the market is not as awash with aluminum as you would expect. Depending on who you believe, anything from 50 to 80% of the metal on the LME could be tied up in long term financing (or cash and carry trades) whereby a bank, hedge fund or major trader buys spot metal and sells 15-18 months forward at a premium in excess of the carrying costs, pocketing the difference. Relying as it does on the robust contango on the LME where far dated metal is priced above spot this game has been rolling on since the financial crisis hit, if not before.

That is not to say investors are all banking on the metal going up. Bear in mind they have sold forward so whether the actual price rises or falls is their buyers problem, not theirs. But of late, some investors have been betting on the price falling, taking out short dated positions selling forward a few months in the expectation prices would come off they hadn’t been reading our latest research. Anyway prices haven’t come off, they have risen and those investors have been forced to borrow metal to meet those sales or “puts” on the market. This usually involves buying physical metal and delivering it onto the LME, or buying warrants for delivery against those positions – hence Reuters recent reports reprinted everywhere you look advising of metal flooding onto the LME, over 70,000 tons this week alone. 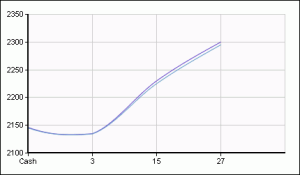 This pushes up spot prices relative to just a week or two out as this graph from the LME shows and is the visible manifestation of all those short positions being desperately covered before they come due. The problem is just two parties are rumored (the LME loves rumors!) to hold between 30-40% of the material each. Barclays Capital (BarCap) is said to be one although they have declined to comment, but as one of the ring dealers with the highest credit ratings, they are well positioned to hold up to 2 million tons on behalf of their clients. With so much of the metal on the market unavailable because it is tied up on long term finance deals and if, as believed, two players hold such dominant positions then spot premiums for anyone needing metal today or tomorrow is going to be high. This is most starkly manifested in the tom/next premium, meaning metal to be delivered tomorrow against the day after. The tom/next premium this week has soared to US$8/day from a small discount a couple of months ago. Meanwhile large volumes are changing hands. On Tuesday of this week for example, 850,000 tons were traded on the tom/next premium, the sellers pocketed over US$6m in premiums alone for just that day’s trades.

On the other side of the fence there are also a limited number of key players. Bloomberg reports that three bets on lower prices each held between 10 and 19% of the August short positions. Ouch that’s a lot of metal to be on the wrong side of price-wise. Another three positions each controlled between 5 and 9% of short positions for the month. One party is said to hold 40% of the short positions expiring next month.

Nor are physical premiums in the wider market any less robust. The sudden shutdown of Norsk-Hydro and Qatar Petroleum’s new Qatalum smelter due to a power black-out has put back the ramp up of the smelter by months. If power is suddenly shut off, liquid aluminum solidifies in the pots and even if rapidly drained causes immense and highly expensive damage. Estimates put the loss of production at 100,000 tons this year and premiums for physical delivery in Asia have jumped 10% from last month already, even though China has adequate stocks and spot buys have been quiet for some months.

So will the short term backwardation on the LME disappear as quickly as it came? No probably not. It would appear those shorts extend into next month and worries about supplies have narrowed the one month contango from $30/ton last month to $10/ton this month. As the above graph shows, the long term contango remains sound and will still support the cash and carry trade but not by buying spot and selling forward, buyers will have to buy one-two months out to catch the low, further restricting supplies for those rolled short positions. All in all aluminum’s gravity defying ride looks set to continue as the supply-demand market moves to balance in the second half and the physical market continues to be tight.