Whatever is decided by the Pemex board, and we suspect the decision will be taken by the Mexican government rather than the board, it would appear rising domestic demand for gasoline (petrol) will drive some fairly fundamental decisions in the Mexican oil refining industry over the coming months. According to a Reuters report based in part on a copy of the Pemex 2010-2014 business plan secured under a freedom of information request, Pemex has been reviewing since March a proposal to import sweet light crude to mix with its domestically produced heavier crudes. Mexican refiners run below optimum efficiency and capacity because domestically produced heavier crude oil is not best suited to the mix of light hydrocarbon products the economy is increasingly demanding. It was fine while Mexico exported most of its production but now the country is having to import 500,000 barrels a day of refined petroleum products, a significant burden to its balance of payments even though the country is in theory producing sufficient crude oil.

Crude oil is a complex mix of hydrocarbons with varying concentrations of heavier complex or lighter simpler carbon-hydrogen molecules. The US standard West Texas Intermediate against which US oil prices are set is a light oil with low sulfur content and excellent properties for making petroleum products such as petrol, kerosene and many chemical products. As a result, it commands a premium in the market over heavier crude oils such as Venezuelan, Brazilian and some Middle Eastern grades. So Brazil’s Petrobas, although it produces more than enough crude still imports lighter grades to mix with domestically produced crude so that its refineries run more efficiently. Pemex lost $7bn last year partly due to government imposed price controls on fuel but also due to the inefficient operation of its refineries. The article says experts have warned falling oil production could make 7th ranked oil producer Mexico a net importer before 2020 as rising domestic demand meets falling crude production. 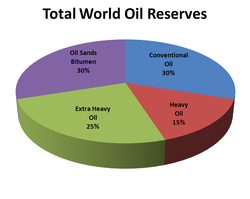 Increasingly oil refiners around the world will face this problem as supplies of light sweet crude are used up and the world becomes more reliant on heavier reserves. As this chart shows, over half the world’s oil reserves are made up of oil sands and extra heavy oil. Huge investments in higher technology cracking and separating technology will be required to process these oils and to avoid environmental degradation in the extraction and refining processes.

Meanwhile, Pemex is modernizing and expanding one refinery at Minatitlan on the Gulf Coast and building its first new refinery since the 1970’s for completion in 2015. But with demand continuing to grow that may not be enough and no doubt Bechtel and its peers are already knocking on Pemex’s door with offers to help build the next generation heavy oil refinery.