Some months ago we received rather a lot of irate press when we covered reports that the Tata Nano had a propensity to burst into flames. Tata has continued to churn out the Nano and we have not received any further reports of them spontaneously combusting so we expect the faulty switchgear causing the problem was promptly replaced. Just to show we are have no bias and will gladly take on the biggest as well as the smallest we have this week the story of the spontaneously combusting Ferrari. Yes that’s the new Ferrari 458 Italia, top of the range, three-year waiting list, US$ 265,000 (plus we heard US$ 75-80k premium if you want to jump the queue!) Ferrari. 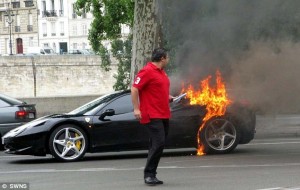 Everyone is being frightfully polite and saying “of course there is no suggestion of a design fault they just spontaneously catch fire! This one was a gentleman in Switzerland who noticed flames coming off his rear parcel shelf and decided discretion the better part of valor as he made a hasty exit well you would wouldn’t you?

Although the car has only been out for a few months and Ferrari doesn’t exactly have them pouring off the production line, model T’s three of them are already reported to have caught fire, plus another went up in flames in a warehouse or possibly the warehouse went up because of the Ferrari? 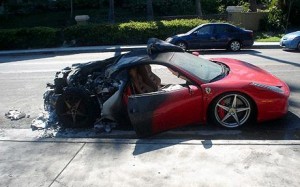 Quite why they are catching alight and why they are burning so vociferously is a mystery even to Ferrari it seems; by all accounts the fires appear to be starting in the engine bay as these shots show courtesy of the Telegraph of a car in California. There have also been several cases of the new super car crashing but that is more expected. It is immensely powerful and most owners probably have more money than driving skill. Probably for that reason few details are published about what the car is constructed from. Prospective owners really don’t care, but Fast-Autos, a publication for ardent petrol heads, says the chassis is an aluminum space frame design and the engine block and many key engine components are also in light weight aluminum well we are a metals blog after all. Even so at some 3000 lbs, the 458 isn’t a light weight but that doesn’t stop the (yes this is the bit you have been waiting for) the 562 hp V8 4499cc engine from propelling the car from 0-60 in 3.3 seconds and on to a top speed of 202 miles per hour, assuming it hasn’t caught alight by then.