Disclaimer: MetalMiner has not discussed pricing trends with any of the mills mentioned in this article. The opinions in this piece are either attributed to other sources or our own.

ThyssenKrupp’s Alabama steel mill was always going to put pressure on incumbent domestic mills, bringing as it does some 5 million tons of capacity into the market. But when it was decided to proceed with the investment in 2007 the steel market was in bullish mood. 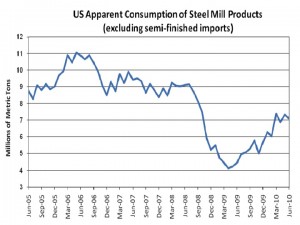 This Dept of Commerce chart shows how steel consumption had been running at high numbers in the years before and it wasn’t until a year later in mid 2008 when demand dropped off a cliff.

Combined with the Alabama plant is a Brazilian blast furnace and slab casting plant gradually ramping up to an eventual 5 million tons a year of slabs. “Only 3 million tons of this will be shipped to Alabama, the balance 2 million will go to ThyssenKrupp’s European plants. The Alabama plant consists of a carbon steel plant with a hot strip mill, which eventually will reach 5 million tons annual capacity, a cold strip line with 2.5 million tons, and galvanizing lines of 1.8 million tons according to a recent Reuters article. An adjacent stainless steel mill will start production in October 2010, initially with a reduced cold-rolled capacity of around 100,000 tons per year and expanding to a maximum of 140,000 tons.

In a market where producers are running at little more than 71% capacity and prospects are uncertain for the second half of the year, concerns are being raised that a price war will develop. Our expectation is that even with this new competitor in the market producers will continue to manage production capacity as they have done so successfully this year and will avoid depressing prices. Although the article states the expectation of Charles Bradford, an analyst at New York-based Affiliated Research Group that there could be a blood bath as incumbent suppliers cut prices to protect their market share, we think this is unlikely. Price have shown a small uptick over the last couple of weeks and we hold to our expectation that rising scrap prices will support a higher finished steel price by year end.

The expectations of price falls, on the other hand, won’t be helped by rumors that ArcelorMittal is looking to regain lost market share. US Steel and AK Steel are said to be the most vulnerable to competition from the new mill both in terms of product mix and fixed cost base. Nucor who is said to command some 75% of the market share in the area nearest to the new ThyssenKrupp plant has a greater portion of production in long rather than flat products and runs a leaner variable cost base operation that is better able to respond to price pressure from rivals.

Nevertheless, additional high quality competition of this kind will inevitably limit the ability of steel makers to raise prices over the next 18-24 months and however disciplined the mills are in managing their capacity will help to limit price rises for consumers. Consumers looking to fix prices going forward may be well advised to cover only part of their requirement. Global demand is weak from previously bullish China to sluggish Europe. Raw material costs appear to be abating (with the exception of scrap prices) and capacity utilization is still historically on the low side. On balance 2011 could be an interesting year for steel prices, much will depend on the strength of the continuing recovery in manufacturing.