The dreams of 16th century explorers and 21st century politicians appear to be finally realized as Russia successfully sailed a 70,000 ton gas tanker through its North East Passage. The Baltica, owned by the Russian state owned shipping company Sovcomflot took just 11 days to travel from Russia’s Murmansk to China’s Ningbo port last month. The North East Passage, so named by the British when Greenwich was considered the center of the nautical world, represents the route from Europe to Asia as opposed to Canada’s North West Passage which marks the route from eastern North America to Asia but really cuts across the same sea just on the other side of the North Pole. As this map from Arctic Portal shows: 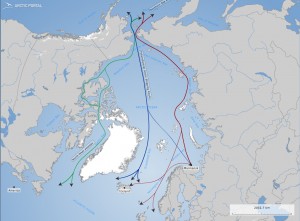 A Telegraph report quotes expert estimates that the North East Passage could be four times cheaper in terms of fuel and charter time than the conventional route via the Suez Canal for cargo sailing between Europe and Asia, although how they come up with that figure is debatable when one considers the distance is said to be 13,000 kms as against 22,000 kms. Nevertheless such a difference still offers the potential for halving transit times for the few brief weeks a year when the passage is likely to be open. Sea ice has been receding for the last few decades and 2007, 2008 and 2009 where the record years for the smallest polar ice cap making the channels wider and the number of icebergs fewer. Even so vessels had to be attended by ice breakers at critical points to ensure they were not caught, and explains Russia’s enthusiasm for opening up this route as they see provision of ice breakers and the establishment of repair ports along their northern coast as potentially lucrative sources of revenue.

This is not the first commercial transit of the North East Passage though by any means. During Soviet times, Russian traders regularly navigated the northern coast transporting fuel, supplies and other goods to remote Arctic settlements but they were not using the passage as a route to Asia. Last year, two German cargo vessels carried 3,500 tons of construction parts from Ulsan in Korea to Yamburg in Siberia. In the process they saved about $300,000 in fuel costs, scale that up to a super tanker and the financial incentives become quite compelling. The Germans biggest challenge was said to be Russian red tape in getting the necessary permits rather than the arctic ice. The biggest challenge though is undoubtedly the short season, the route is only open for about two to three months a year at present, although on current warming trends this may gradually increase in the years ahead. The voyage is still sufficiently dangerous that an ice tanker is needed to make the journey, and in the case of the Baltica it was accompanied for much of the 2000kms northern route by not one but two nuclear powered ice-breakers. Nevertheless it is an interesting expansion of Arctic commercial exploitation which is likely to escalate in the years to come as moves to exploit oil, gas and minerals are ramped up.

PREVIOUS POST:
Are Iron Ore Prices Providing Signals on Steel Prices?
NEXT POST:
Nucor's Dan DiMicco on the Economy, Trade and US Manufacturing