Britain and France Rumored to be Sharing New Aircraft Carriers

Postscript: We understand this deal is off but still, enjoy a little humor this Labor Day from MetalMiner Editor, Stuart Burns

Reports are circulating that cash strapped Britain and France could share aircraft carriers in a move to save both countries money. An AFP report in News24.com said although the British MOD declined to comment on the rumors, calling them speculation, there was talk about British Prime Minister David Cameron and French President Nicolas Sarkozy could unveil plans as soon as their scheduled meeting in November. According to a Daily Mail article sources in Whitehall, London said it would allow the Ministry of Defense to downgrade or even scrap one of the two 65,000 ton replacement carriers being built at a cost of £5.2billion ($8bn) each. 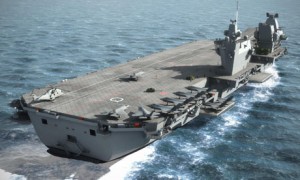 This photo courtesy of the Guardian newspaper is computer generated as the British carriers are under construction and the first is not scheduled to enter service until 2016 at the earliest.

MetalMiner has heard that several problems remain to be ironed out before Britain’s planned two new aircraft carriers and France’s one new aircraft carrier can go under joint command. Notably staffing rota’s. France observes a strict 35 hour week and the Royal Navy has had to move hastily to quash rumors that access to the engine room and aircraft hangers would be locked during out of hours, saying additional berths would be required to carry the extra crew needed to cover French shorter working weeks.

In fact long before the vessels are put to sea problems are likely to arise due to cost over runs. The British agonize over every delay and cost increase that seem to go hand in hand with major military build programs. The French on the other hand feel accounts are an Anglo-Saxon obsession and will have none of it saying “eet costs wot eet costs, zat is wot zee government is zer for.”

Admirals on both sides appear to be squabbling over the number of guns, the French preferring to load more aircraft on board the British saying weight has to be reserved for guns and anti ship missiles. Apparently the French position is born from an expectation that if the enemy gets close enough to be able to shoot a gun at them then you invite them on board for dinner and cognac.

The biggest challenge seems to be over culinary expectations however. French crews insisting that extensive space is made for cheese and wine cellars whereas the British are demanding storage space for the navy’s traditional ration of rum. All hell was heard to have broken lose when it was suggested British cooks could serve kitchen rosters until it was agreed they would only work during the 11 official national French holidays, 8 religious holidays, weekends and the whole of July and August when the French would be absent. One area both sides agreed on unanimously though was regarding the wine storage, the French are to be given a free reign on stocking and management of the cellars, with a grant from the EU to cover the cost.

PREVIOUS POST:
Russia Automotive Production not Without its Challenges
NEXT POST:
Beijing's New Stimulus Package, This Time for Renewables