In spite of reports of over stocking and recent falls in prices some parties are predicting that a rise in steel demand early next year in China will lead to a significant rise in iron ore prices from recent lows.   A Reuters article states rising demand in China coupled with falling supply from India will create the environment for the big three iron ore producers of Vale, BHP and Rio to raise prices. The iron ore producers moved from an annual contract to a quarterly contract and question marks remain as to whether the quarterly contract will survive. Major Chinese iron ore consumers buy their full allocation when prices rise, even going to the extent of selling surplus tonnage on to smaller Chinese consumers at higher spot prices but when spot prices fall below the contract price, they promptly renege on the quote and buy on the spot market.

This graph from Reuters tracks the annual and quarterly benchmark prices against spot over the last few years.

Standard Chartered Banks’s Judy Zhu is quoted as predicting iron ore will rise to US$ 200 per metric ton from around $140 per ton today as Chinese steel demand rises further in 2011 to between 613 and 625 million tons. 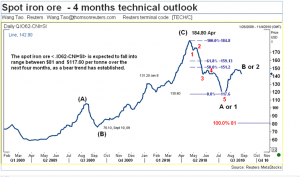 The technical signs in the short term are not good though as this graph shows. Both chartists and market observers are predicting prices could weaken over the coming months but thereafter some predict prices will rise.

One reason some believe prices will increase involves Indian iron demand expected to be restricted, as we reported recently the southern state of Karnataka, which accounts for about a quarter of India’s iron ore shipments, has banned 10 ports from exporting and stopped the transfer of iron ore to other ports for export last month in a crackdown on illegal mining. The Indian government is also looking at additional taxes to discourage iron ore exports, with some analysts saying it may raise duty on iron ore lumps further to 20%. India already lifted the tax on iron ore lumps to 15% from 10% in April and levied a 5 % duty on iron ore fines (ores less than six millimeters in diameter) late last year as the government seeks to claw back some of the bounty iron ore miners are making on exports. It suits the government to use taxation as a means to discourage exports. India is the third largest supplier to China after Australia and Brazil so any restriction is expected to have an impact on the market.

Since hitting a trough in July, iron ore prices on the Steel Index have rebounded by some 20% as the above technical chart shows but recent trends in just the last few days reported in a separate Reuters article have suggested a further decline to between $81 and $117.60 a ton may be possible over the next four months. Whether short term pain will be followed by long term gain remains to be seen but we are less bullish than Standard Chartered. Chinese demand may indeed increase slightly next year but not at the pace of this and demand in OECD markets is only slowly returning as automotive and construction make patchy recoveries. Rising domestic supply of iron ore in China coupled with new overseas mines coming on stream will, we believe, prevent a return to the high iron ore prices seen earlier this year.