A recent Financial Times report entitled the “The road ahead for the cars of tomorrow kicks off with a comparison of a General Motors vision of motoring given to the public in 1939 at the New York World’s Fair and compares it to their current version at the Shanghai Expo. Back in 1939 GM correctly predicted that by 1960 we would have the interstate highway system with cars traveling “at up to 50mph! Well the world has exceeded that by some margin, providing it’s not during rush hour! Some other predictions were not so prescient. GM was several decades ahead of their time suggesting we would have distance measuring technology by 1960.   It is only just coming on in premium brands fifty years later. So accepting that car-makers projections of the future are just that –   projections and nothing more, what are car-makers suggesting we can expect in the decades to come and more importantly where are they pouring their billions of R&D dollars?

First, the dynamic in car design could arguably be said to be coming from the needs of the fastest growing sector of the industry, which is emerging markets. City planners in places like Shanghai faced with populations of 10m plus (Shanghai has over 23m) many of whom own cars or will soon own cars, are facing a rapidly changing environment. Congestion, pollution and the consumption of land for ever wider highways are driving city planners to demand new ideas from auto companies. As we have long known, the more and better highways you build the more people will buy and drive cars. Simply adding more roads is not the answer! 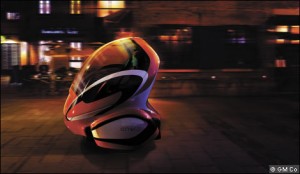 GM suggests the EN-V will drive autonomously using GPS and vehicle to vehicle sensing technology, leaving the occupants free to work or surf the web (this has to be a generational thing because I can’t imagine surfing the web while whizzing through rush hour traffic but there you are). The vehicle is expected to weigh just 500 kgs (1100lbs). And at roughly five feet long, the EN-V takes up much smaller parking lots (or even it is suggested in an apartment but how you would get it through the front door and up the stairs defeats me).

The article suggests car-makers are responding to growing pressure from consumers, regulators and urban planners to develop compact, clean and affordable vehicles that contribute less to congestion. Personally, I wonder whether much pressure is coming from consumers. Most consumers like new designs, more space, want new gadgets, yes of course want lower fuel efficiency, welcome lower emissions particularly if it lowers their car or road taxes, but they consider congestion, town planning, and wider economic and environmental issues as someone else’s problem. Consumers want convenience and not surprisingly that is what a BMW think tank set up to study –   mobility trends three years ago called “Project i found. The project team visited large cities in Asia, the US and Europe, talking to customers and policy-makers. Customers said they wanted a safe, premium car, and that a two-seater was not good enough. “People don’t want to make any sacrifice when it comes to electric cars, Ulrich Kranz, head of Project i is quoted as saying, “They want us to deliver excellent quality, sufficient space for up to four passengers plus luggage, and a good range.

That doesn’t seem to stop car producers from spending R&D money on mini vehicles though.

We will follow-up this post later this morning and discuss the future of mini vehicles.