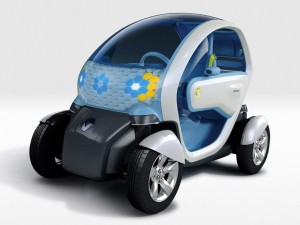 Renault has their own concept project called the Twizy. It is a two seater with passenger behind the driver and so narrow that two Ëœcars’ could be parked side by side in a normal auto parking lot. It is really a bridge between a scooter or motorcycle and a small car, and may appeal to urban dwellers in some emerging market cities where two wheels are still outselling four by five to one.

Looking further into the future, Bjarke IngelsÂ¨, Founder, Bjarke Ingels Group architecture firm said, “Our bet is that cars will become driverless due to the evolution of technologies such as self-parking, crash prevention, cruise control, pedestrian detection and GPS navigation. As these cars will also be noiseless and free from pollution, the result will be an elastic urban space that can expand and contract to accommodate peak traffic hours or allow a park or plaza to invade the car lanes to fit the demands of its citizens. But our expectation is this will only happen in cities that are still undergoing massive regeneration and planners can alter the layout and use of areas. We struggle to see it being applied in London, Chicago or New York. But it may work in situations like Singapore, which arguably has the most sophisticated urban planning environment in the world when it comes to cars, with variable pricing and an extremely efficient (and well used) low cost mass transport system that’s what can be achieved when you don’t need to consult the voting public.

That doesn’t stop brilliant brains both corporate and individual seeking to provide solutions to the perceived problems. Back to the UK and Gordon Murray, one of Formula One motor racing’s most successful designers steering McLaren to three constructors world championships and designer of the world’s fastest road car for 12 years the 240 mph McLaren F1 road car and a 208 mph Mercedes-Benz SLR McLaren. According to a Telegraph article, Murray has turned his back on speed but not on ingenuity, starting his own company Gordon Murray Design to build the three seat 74 mpg T.25 petrol engine and electric T.27 cars. 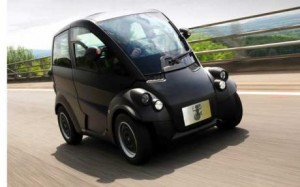 Built on a light weight tubular steel chassis, GMD reckons the cars are 80% cheaper and 80% smaller than small cars built by conventional routes. But even though the T.25/T.27 satisfy many of the criteria urban planners believe will be needed in the future such as low weight, low emissions and the ability to park at least two T.25’s in the parking space of one regular car, it remains to be seen whether British buyers will see the attractions in sufficient numbers. Maybe Murray will only realize his ambitions for mass production in those emerging markets where consumers tastes have not been too deeply ingrained with the big is beautiful vision of modern motoring.