This is the second of a two part series. The first post appears here.

Meanwhile, companies like Evergreen Solar of Marlboro, Mass., will move the final manufacturing steps of its solar panels to China, costing 300 US jobs, because manufacturing costs are so much lower in China. Local banks were keen to lend them the money on a five year term with no interest or principal to pay until maturity. 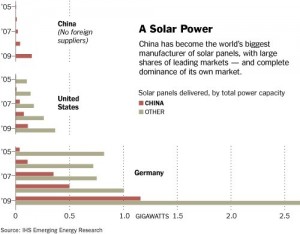 As this graph from the New York Times shows, China’s ascendancy in solar panels has been rapid. Chinese producers now have major penetration into western markets from zero just a few years ago. Wind power is not far behind.

When Sunzone purchased the 22 acre site from the local government, they paid just $90,000 an acre when the market price was $270,000 an acre. Since then it has risen to $720,000 an acre, allowing the company to easily borrow against the asset and fund rapid expansion. As mentioned above, the bank has recently agreed to an expansion loan of $11 million at 6 percent interest, but the provincial government then gives Sunzone a direct rebate for half of that making the effective rate just 3 percent. Unlike government backed loan guarantees in the US, which are almost exclusively for domestic electricity generation, these are for a firm exporting 95 percent of its product, and Sunzone is not unique by any means. China makes nearly half the world’s solar panels and wind turbines, according to various sources. Even with a large, attractive and heavily protected home market, much of that will be exported.

Solar and wind turbine power generation projects in western markets are only possible with the subsidy of local governments, subsidy generated by increases in energy tariffs paid for by consumers. It could be argued western electricity consumers are paying less of a premium than they would otherwise do to set up and run green tech projects because power companies can access lower-cost Chinese equipment than would be the case without these supply options. But at what expense?

President Obama made much in his inaugural address of the benefits that green tech industries would bring to the US in terms of jobs and prosperity. In fact, what is being allowed to happen is those jobs are going the way of so many in Europe – being shipped to China as western manufacturers can no longer compete with government-subsidized support for green tech manufacturing operations.

Solar and wind power electricity generation will still happen in the US and Europe. Some jobs will be generated as a result, but all of the jobs that would have come from manufacturing the components will go to China. Large Chinese wind turbines now sell for about $685,000 per MW of capacity, while western turbines cost at least $850,000 and up to $1,000,000 depending on which authority you accept. Western producers are saying they are staying ahead of the Chinese by more advanced technology as evidenced by Chinese manufacturers buying components from western producers (but for how long?).

China is notorious for assimilating new technological developments and within months passing them off as their own. While the industry is rapidly innovating, western producers at the sharp end of the technological developments can keep one step ahead, but most aren’t in that position. For every successful Siemens or GE sale there are two or three Evergreen Solars closing up shop and heading east.

We have WTO rules for a reason; why don’t we enforce them?

Editor’s Note: In a follow-up post we will cover the recent 5800 page petition against China recently filed by the USW involving China’s clean tech industry.