Back in May we had the opportunity to speak with Wayne Atwell of Casimir Capital about a range of topics related to the metals and mining industry. But we mostly talked about some interesting statistics involving “intensity of use (or the amount of metals consumed on a per capita basis) as well as “self-sufficiency ratios or the amount of raw materials a particular country is capable of producing for its own usage. Wayne continues to jet set around the globe visiting mining projects far and wide. We caught up with him again last week and wanted to report back some key trends he has witnessed on his travels.

The first set of trends impact copper in particular but also apply to materials like metallurgical coal. Wayne’s primary observation involves the slippage in ore grades for new mining projects. It used to be (25 years ago) that many copper mines got their start with copper at 1.25% ore grades. Today, the new projects tend to hover around .75% ore grades. The degradation of course means it costs a lot more money to undertake a large mining project. This chart shows the degradation: 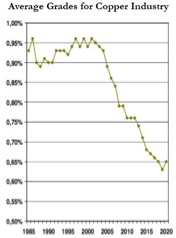 What does all that mean? Well, obviously, the cost of producing one ton of copper increases as the grades slip. The same can also be said of metallurgical coal. Low volume metallurgical coal sold for $55/ton 8-10 years ago and now sells for $200-225/ton fob. The cost of low volume metallurgical coal 8-10 years ago would have been approx $35/ton and is now $80-110/ton fob. According to Wayne, “Coal costs have gone up as the best/easiest to mine coal has mostly been recovered and the low volume we mine is deeper, with thinner seams and generally harder to mine. In each case the capital cost to put a property into production has increased.

The second trend Wayne points to involves the tighter partnership that mining companies have forged with local communities. Whether the project involves copper (as Wayne has seen with a new copper project coming on stream in the Yukon) or rare earth metals, mining companies have formed more strategic partnerships with groups like the First Nations (a Canadian indigenous population) to gain local support and buy-in.

In light of these trends, and as China continues to grow and require ever greater supplies of key raw materials, we asked Wayne to comment on Chinese M&A practices around global mining investments. He believes Chinese firms will need to pay careful attention to two areas: particularly safety (as we have previously reported) and working with local communities as opposed to bringing in their own workforce (as the Chinese often do). With better local grass roots organization, mining firms often face greater local opposition putting pressure on mining companies to “do the right things. At some point, China will have to address its own safety record and bring its business practices up to international standards.

Disclaimer: AQM Copper and Western Copper are banking clients of Casimir Capital. Wayne Atwell and his family do not own any shares of either company’s stock.