A Reuters article this week came out with some pretty bullish talk on palladium. The majority of palladium, (58% in 2010),   is used in auto-catalysts, with industrial catalytic applications running second. Consumption, therefore is closely tied to the state of automotive and industrial economic activity. Palladium prices rose to their highest level in four months on Tuesday, rallying by more than 3% on the day as a combination of fund-related buying and a favorable technical backdrop boosted the price the article said. Spot palladium reached $543 an ounce and Reuters reported traders expectations of $570 an ounce being the next target on the upside. Palladium is on track for a 33% increase this year and is one of the top performers of the entire commodities complex on the back of improving numbers coming out of Europe and continued strong growth in China, coupled to a relatively tight supply market. ETF buying has to be a large part of the pressure on prices; funds have seen a massive inflow this year into metal backed ETF’s.

If it were just a simple matter of rising global auto sales all PGM’s should be rising and indeed platinum has risen as well but not as strongly as palladium nor with as much potential on the upside. Standard Bank, in a note to investors reveals why by way of some cunning analysis. They have broken down palladium use in the four big auto markets, China, the USA, Europe and Japan, and then further analyzed to what extent each region favors palladium over platinum platinum being more efficient for diesel engines whereas palladium is better suited to higher temperature, lower sulfur emitting petrol engines. Despite the fact that Europe is seen as a largely platinum consuming market because of the preference for diesel engines, it is according to the bank, the largest consumer of palladium for auto-catalysts. 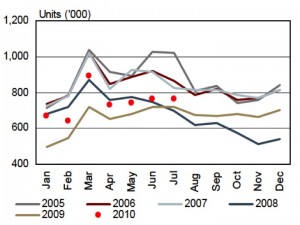 As this graph shows. adjusting auto sales by the proportion of palladium used shows that in palladium-adjusted terms overall auto demand is still weak compared to previous years but is growing steadily. Most important, it is growing in China, a country that uses more palladium in auto catalysts than platinum. Auto sales are expected to pick up further there toward the year end. Standard Bank is expecting palladium adjusted auto sales to approach levels last seen in 2006-7 next year and while they expect both platinum and palladium to rise further next year they are betting palladium will be the best performer putting a number of US$650 per ounce on the precious metal within six months.