Yesterday, Nucor CEO Dan DiMicco testified in front of the US House Ways and Means Committee arguing in favor of HR 2378, better known as the Currency Reform for Fair Trade Act. The proposed legislation would address the subject of China’s exchange rate policy as follows, courtesy of GovTrack:

“Currency Reform for Fair Trade Act – Amends the Tariff Act of 1930 to require the administering authority to: (1) determine, based on certain requirements, whether the exchange rate of the currency of an exporting country is fundamentally and actionably undervalued or overvalued (misaligned) against the U.S. dollar for an 18-month period; and (2) take certain actions under a countervailing duty or antidumping duty proceeding to offset such misalignment in cases of an affirmative determination. Subjects the misalignment to the U.S. dollar of the currency of nonmarket economy countries also to the countervailing and antidumping duty provisions of the Act.

DiMicco offered several arguments in support of the legislation that we have summarized here:

First, the question of Chinese USD/RMB exchange rates, as we have previously reported, is cut and dry. In his testimony, Dan stated, “Our trade deficit with China grew from $30b in 1994 to $256b in 2007. While the trade deficit shrank when the global recession began in 2008, the gap is widening again.

Consider these facts as reported by the US Federal Reserve:

Now, let’s juxtapose that with the Japanese who are squirming (panicking?) about the alarming ascent of their currency against the US Dollar (it’s at a 15 year high). In percentage terms that has made Japanese goods about 10 percent more expensive today than they were say one year ago. But in four days, China made their goods 33% cheaper! Of course this added to the deficit and contributed to the loss of manufacturing jobs. Where can a US factory pick up 30+ margin points with that kind of [unfair] competition?

Simple math explains it all. If imports > exports then we have a deficit (orange bars below). If exports > imports then we have a surplus. The last time the US had a trade surplus was in 1975! See this chart below from the Congressional Research Service on US trade with China from 2000-2009: 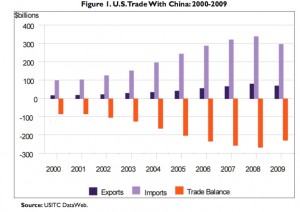 For another perspective on currency exchange rates and mercantilism, we would suggest this piece by economist Howard Richman from Seeking Alpha entitled US Trade Deficit Still Growing.

And for those of you who feel this legislation will start a trade war, I’ll defer to DiMicco’s testimony, “We are already in a trade war; we just haven’t shown up yet.

Disclosure: Nucor is a paid sponsor of MetalMiner, but we have long held these views. See this post from May 14, 2009