Copper Rising and Widely Expected to Continue to Test Highs

A number of sources are predicting copper has further to run in Q4 this year and into next. First, Standard Bank in their daily notes to clients said that latest Chinese copper import figures were strong, with net refined copper imports climbing 19.6% month over month in August, which followed a 6.1% month over month increase in July. Scrap imports were also 5.2% higher in August, the third monthly increase in a row. Scrap now accounts for around 60% of combined net refined and scrap imports, meaning China relies more on scrap than primary metal for supplies. Actually this should come as no surprise. Back in early 2008, the country was importing about 80% of its combined requirements as scrap due to high primary metal prices. Chinese imports of concentrates however are said to be down, well below the average 550,000 tons per month seen in the first half of 2010. Largely this is believed to be due to low spot treatment charges that have encouraged smelters to undergo maintenance shutdowns. Chinese imports of primary, scrap and concentrates are expected by Standard Bank to pick up further in Q4 in spite of a gradual cooling of growth rates in China.

Elsewhere demand is gradually picking up in Europe where manufacturing, if not consumer spending or housing, is doing well. US manufacturing is also still powering ahead with Caterpillar, GE and other majors announcing buoyant conditions, all supportive of strong metals consumption. 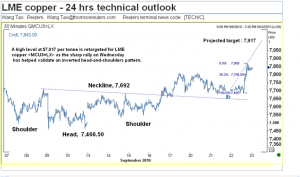 The technical chartists are also bullish for prices to move higher as this recent Reuters graph and note illustrates.

On the supply side, several industry players in the form of investors Dennis Gartman quoted in Mineweb, and banks RBC Capital Markets quoted in Reuters, fear tight supply will add to price pressure in the years ahead. Gartman, an independent investor, is quoted as saying he is already aggressively long copper and aims to buy more on dips. RBC sees copper prices easing a little in 2011 due, in their opinion, to slowing Chinese demand before a strong upswing again in 2012-2014 to prices over $8250/ton. Personally we do not see Chinese demand softening anywhere near enough to push prices back into the $6500/ton territory, and although we feel the very recent strength this week has more to do with dollar weakness we do agree the fundamentals support copper testing its 2008 peak again within this year.