The currency markets are in a state of an international crisis,  according to Guido Mantega, Brazil’s finance minister in a recent Financial Times article. In fact, Brazil is just voicing what many fear in private is a rapid deterioration in the exchange rate markets. For many emerging and resource based economies like Brazil, Thailand, Australia, S. Africa, etc.   net inflows of money have been running at record levels driving up the value of the currency and making exports uncompetitive.

Relative to the   US and other major currency blocks like the European Union, emerging markets like Brazil and Asian markets like Thailand and South Korea are growing strongly. According to ForexBlog US$ 1.4bn has been pumped into the Thai stock market this year alone and Thailand’s reserves have topped 50% of its GDP. Consequently the currency is running so high exporters are clamoring for action to be taken to weaken the currency.

But as Japan’s recent intervention has shown, throwing $20bn at the problem by selling Yen results in only a hiccup to the trend. After dropping, the Yen has since recovered again as this graph from x-rates.com shows.

Both Switzerland and South Korea have been intervening all year. In the case of the Swiss, they have at best slowed the appreciation and for South Korea the Won has remained relatively flat but a depreciation, which exporters would love, has proved impossible. At the same time, the once maligned Euro, battered by a sovereign debt crisis and low growth has been on the rise for the last few months even though ECB rates are at globally low levels and leading country debt is yielding minimal return. So what is going on? Well as with so much else in macroeconomic developments China is intricately involved.

China has been buying Euros and Yen in preference to US Dollars this year in an effort to diversify holdings and keep its own currency cheap against those secondary reserve currencies. The effect has been to drive up the Euro and Yen against the US Dollar as the Chinese Renminbi and Dollar can be considered the same due to the peg. According to a Businessweek report, China bought a net 735.2 billion Yen ($8.3 billion) of Japanese bonds in May, doubling purchases for this year as it heads for the biggest annual increase since at least 2005. China’s purchases of Japanese debt have exceeded sales by 1.28 trillion Yen since January. This year’s purchases are nearly five times as much as for the whole of 2005, which was the biggest year for Chinese buying of Japanese bonds between 2005 and 2009.   No wonder Japanese exporters are screaming for action but the benefit of the recent intervention is likely to be short-lived. Some analysts are expecting the currency to be at 80 Yen to the Dollar by year end. As the WSJ observed this week all the major Asian economies are now suspected of intervening to contain rises in their currencies but they are unlikely to be successful, the forces marshaled against them are just too large.

Many see this as part of a longer term trend by China in particular towards a more diversified mix of currencies. The problem for China is that a significant move towards any currency other than dollars raises that currency so significantly it causes real pain in the target country and creates bilateral trade issues as a result. Brazil is caught between a rock and a hard place. The Real strength is at least in part due to the peg China has kept to the US Dollar, a free floating Renminbi would help ease currency stresses worldwide but because China is Brazil’s largest trading partner they too are worried about upsetting them to join an international movement for change.

Meanwhile China is having to subsidize it’s currency manipulation to the tune of some $40bn per year according to an FT article. Bonds issued to mop up currency inflows are paying 1.5-1.65% points more than that earned on the country’s reserves, according to estimates by a London hedge fund. So it costs China up to $40bn to subsidize the estimated 2.5 trillion of currency reserves. 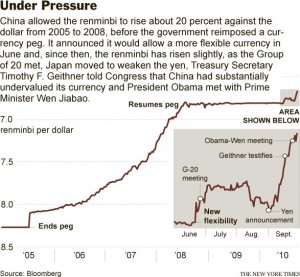 Will that encourage China to allow the Renminbi to float free or at least to move in a controlled fashion to a more realistic exchange rate to the Dollar? No, even after five years of such subsidy it would only consume some 17% of those vast reserves. Meanwhile the export and manufacturing lobbies are so powerful in China it is unlikely any drastic change will happen and the historic game of give and take, so clearly illustrated in this graph from the FT,  will continue.