The iron ore market is unquestionably in a state of flux, as everyone who opens a paper or watches the business news is aware, iron ore prices have been violently volatile as this graph from environmental website MongaBay.com shows. Not shown is the latest fall in prices again reflected in both spot and quarterly price reductions. 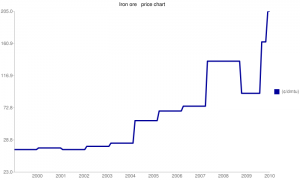 Steel producers and consumers have gone through a lot of pain as a result and steel producers in particular have spent the last couple of years ducking and diving to minimize price rises and maximize their opportunity when prices fall. This very volatility is in large part what killed off the decades old annual price contracts which dominated the seaborne iron ore trade in SE Asia since the 1960’s. Steel consumers simultaneously complained loudly about successive price rises and played their internal market buying at contract prices and selling on at spot to smaller consumers. Then when prices fell they reneged on contracts with miners as they found they could buy cheaper on the spot market. This year the annual contract was announced officially dead and a quarterly price formula was introduced based on spot prices in the preceding months. The quarterly contract has met with mixed success and some (including MetalMiner) have already suggested it will go the way of the annual contract although Rio Tinto called on consumers this week to give it more time, claiming the stability of a quarterly fixed price had advantages for steel consumers over spot changes. In reality though most Asian steel mills change their prices frequently during the month and only selected clients like automotive have any degree of continuity.

China though has other ideas, calling on miners to adopt a pricing formula with similarities to the aluminum industry where raw material alumina is priced as a percentage (13-14.5%) of the finished price of refined primary aluminum ingot. Quoted in a Reuters report, Shan Shanghua, secretary general of the China Iron & Steel Association (CISA), said iron ore prices should be based on steel prices, a reversal of the current market in which China, the world’s biggest steelmaker, largely has iron ore prices dictated to it by the big three iron ore suppliers.

“I view iron ore as an intermediate ingredient that only has value because it is processed into steel by the steel industry,” Shan told a conference in the Chinese port of Dalian.

He may be right but persuading the iron ore miners to give up their right to set prices will be a monumental task. Miners would argue that currently prices are largely set by supply and demand as reflected by the spot price, although Vale, Rio Tinto and BHP dominate the SE Asian seaborne iron ore trade they are not the only suppliers and a growing futures market has the potential to increase the liquidity of the market to the point where it becomes the primary price setting mechanism. If iron ore supply becomes too great and prices slump as a result of over supply, miners have the option to reduce production and manage (of course some would say manipulate) the market. If iron ore was priced as a fixed percentage of the price of finished steel slab or steel billets the most basic refined finished steel products iron ore producers would be at the mercy of over supply created by too much investment in steel making exactly the position China finds itself in today. Indeed even the similarly decades old alumina to aluminum pricing formula is showing signs of coming apart in recent months as major alumina refiners have announced their intent to sell at spot as long term agreements expire in coming years. Spot alumina prices exceeded contract pricing by a considerable margin over the last 10 years, on average by around $75 per ton or one third according to the Toronto Star.

So seductive as the idea is for steel producers it is highly unlikely that pure play miners would agree to such an arrangement. Fraught as the last two years price negotiations have been, spot open and transparent pricing arrangements are the way the whole metals industry is trending.

PREVIOUS POST:
Join Us For This Week's MetalMiner Aluminum Market Pulse Survey!
NEXT POST:
A Currency War is Being Fought Behind the Scenes