A conversation this week with Wayne Bramwell, M.D., of upcoming mining junior Kasbah Resource, quickly evolved from an update on their exciting Moroccan tin mining project Achmmach to a much wider discussion of the tin market and how rapidly it is developing as an investment phenomenon. 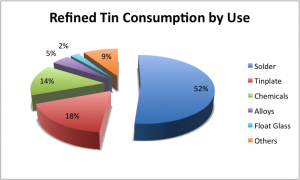 Rather quietly and largely without great fanfare, tin has evolved over the last decade from a metal largely reliant on the traditional tin plate market to one driven by demand from cutting edge electronics and mainstream chemicals applications. Data from the ITRI shows tinplate, while important, is no longer the main driver of consumption.

As a recent analyst report points out, every laptop contains on average 32 grams of solder, which is 96% tin. Every Blackberry contains 7 grams of solder. Tin is as important to electronics as rare earths or precious metals, both of which get much more press. Demand for tin in the electronics industry makes it an integral part of the modern digital age and yet until a year or two back many in the investment community still looked at tin as a product primarily used for packing baked beans.

The level of interest in tin is perhaps understandable when we reach a little further back in time. The International Tin Council, the cartel formed in the 1950s and which finally imploded in the 1980s did much to turn the investment community off tin. Many got burned in the ensuing price collapse and the belief was probably widespread that this was a market in which a few key players could manipulate the price, hardly an attractive environment for anyone other than one of the insiders.

Consequently, investment interest in tin has lagged the rapidly changing dynamics of supply and demand. In just the last 12 months, supply constraints have become a major factor. Chinese producers have experienced a perfect storm of power restrictions, concentrate supply problems and bad weather severely restricting output at many of the world’s top ten refiners. Meanwhile Indonesia, easily the world’s most high profile, if not the largest supplier has faced declining grades, constrained investment and dwindling onshore reserves, while LME stocks, the bellwether of supply and demand, have halved this year from a high at the end of January. Standard Bank put the tin market in deficit to the tune of 6,000 tons this year and is predicting at least a 13,000-ton deficit next year. Finally, sustainability as a concept in mining has evolved rapidly in recent years from meaning not just environmental, but also to a social and political dimension. The approach that was so effective against blood diamonds is being applied to metals causing supply disruptions from the Democratic Republic of Congo just at a time when investors were being put off the country following the theft of First Quantum’s copper assets by the state.

Reading the analyst report linked above, with data taken from the ITRI, one could be excused for thinking there are in excess of twenty new projects on the point of commercial realization. 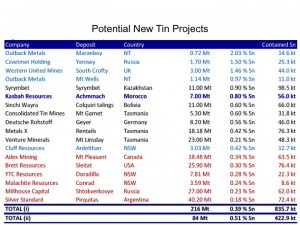 But in reality, nothing could be further from the truth. The majority of these — what the industry terms “occurrences” — are not definable resources. Even of those five or six that have been defined according to accepted standards, only four have anything like an economic future and three of those two in Australia and one in Canada — are low-grade polymetallic reserves dependent on the co-economics of the other metals occurring. The table is potentially misleading in that we do not have security of future supply it suggests, almost certainly not for the volumes that will be demanded by our increasingly digitally reliant world. One of the oldest of metals used by man has one of the brightest investment futures, for anyone with their hands on quality supplies.