We wouldn’t classify ourselves at MetalMiner as petrol-heads, indeed we write more often on fuel efficiency in automotive developments than out and out sports cars but the boys among us at least can’t resist the occasional lustful review of a new super car if (as the editor sternly reminds us) provided it has some metals content to the story.

Well for once we don’t have to bend the rules with this one, that most iconic of brands, Jaguar, a mark that has so often broken established concepts and moved design on over past decades with some of the most beautiful works of automotive art has done it again in this decade. Stealing the headlines at the Paris Motor show for once no one is interested in a new Prius lookalike or a Chinese import that runs on rice wine. Jaguars stunning concept super car shows what electric cars of the future could look like if you have pockets deep enough to afford it. Photo courtesy of ubergizmo.com 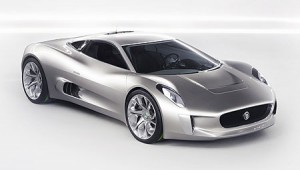 Obviously as a concept car, no price tag is put on the all aluminum (note to Ed) 205 mph C-X75, but with micro turbines recharging the lithium ion battery pack you can bet it won’t be cheap. The C-X75 can manage 68 miles on an all battery run and re-charge in 6 hours plugged into the mains but oh what a glorious experience those 68 miles would be, 0-62 mph in 3.2 seconds is itself put in the shade by the 2.3 seconds it takes to accelerate from 50 to 90 mph. Four powerful 195bhp electric motors – one for each wheel – produce 778bhp and an astonishing total torque output of 1,180lb ft.

This isn’t the first all aluminum Jaguar. The all new 2010 XJ is also, like the C-X75, constructed on an extruded and bonded all aluminum chassis, with all aluminum body panels. The curb weight is still a significant 1350 kgs (3000lbs) but 230 kgs (500lbs) of that is the lithium ion battery pack. The 60 liter (16 US gallon) fuel tank will extend the car’s range to 560 miles by powering two 94bhp gas micro-turbines which according to a Telegraph article compress air to drive generators which in turn produce the electric current for re-charging. When running the micro-turbines, they produce just 28g of Co2 per km qualifying the car for zero road tax in the UK and no doubt qualifying for various subsidies in other markets.

Beautiful and brilliant as the C-X75 is, it remains an example of how all aluminum construction is only gaining traction at the top end of the market. Randall Scheps, Chairman of the Aluminum Association’s Aluminum Transportation Group (and not coincidentally marketing director of ground transportation for Alcoa) is quoted in a Reuters report as saying aluminum consumption in cars could double in 10 to 20 years, as if that is just around the corner. The fact is while aluminum is being embraced at the top end, the cost of retooling, the unwillingness of buyers to pay an up front premium in return for a lower life cycle cost and the improvements steel producers have made in thinner stronger steels are all creating a strong headwind to greater use of aluminum in automotive construction.   Even now only a quarter of US cars have aluminum hoods and even Scheps concedes that aggressive light weighting by switching from steel to aluminum will only reduce car weights on average by 15% saving about 2.7 miles per gallon of fuel. When engine development has yielded improvements of 10 mpg in the same number of years one can see why mainstream automotive manufacturers have been slow to adopt aluminum to a greater extent.

Should the C-X75 ever reach production it is likely the final construction will actually be multi-metal, or even multi- material with composites playing a role in some areas. Meanwhile those of us who appreciate automotive art and make something of a living from the aluminum industry can appreciate the C-X75 for what it is, a work of art on (aluminum) wheels.