Silver – The Price is as Volatile as the Predictions

We are used to hearing divergent views on metal prices, but rarely can well respected sources differ as much as we are currently hearing in the silver market. Quoted in a Telegraph article, James Turk, who founded bullion dealer GoldMoney in 2001 and is said to manage $1.2 billion of assets, thinks prices could hit $50 by the end of next year. Mr. Turk believes quantitative easing will devalue currencies and send precious metals much higher. He uses the traditional gold-silver ratio to illustrate that silver is undervalued at current prices. Simply put, the gold-silver ratio is the number of ounces of silver it takes to buy one ounce of gold. With silver currently at about $22.10/ounce and gold at $1316.25, the ratio stands at 59.56. According to Mr. Turk, in 1970 it was 20, it peaked at just under 100 in 1970 and the average is about 40, but in February 2010 it was as high as 72 when gold was high and silver exceptionally low, now it is headed back to its long-term average.

So much for the bulls; what of the bears? Well, Suki Cooper, a precious metals analyst at Barclays Capital takes a much more measured tack. While not bearish, she has an average target for silver next year of $22.20, expecting the metal to peak in the second quarter at an average price of $23.70. Silver is still in surplus, but it has benefited from safe haven buying, she is quoted as saying, meaning it has benefited this year, but don’t expect it to continue unabated.

As an Economist article points out, silver not only offers opportunities for investors keen for a safe haven, but it also offers diversity as an industrial metal. Whereas investors buy around 25-30 percent of gold, only about a tenth of global silver production goes the same way. Roughly half the world’s silver goes to industrial uses, particularly electronics and in photovoltaic cells. Demand is likely to continue to increase as economic activity recovers, particularly in Asia as where so much of the world’s electronics originate. In addition, supply, while not tight, is at least constrained by the fact that 75 percent of the world’s supply of silver comes as a by-product of copper, lead and zinc mining. So ramping up production is dependent on the economics of those metals before silver.

Having said the above, investor interest in silver, the main driver of current price strength may be waning. Ms. Cooper states in the Telegraph that in the current year to date investment inflows into silver have amounted to 1,377 tons, compared to the nine-months to September 2009 when it was 2,942 tons. It could be fear of a slowing in global growth over the next 12 months will mean industrial demand for silver will flatten out and with it investor appetite, even with quantitative easing to keep investors jittery there are no shortage of gold opportunities around for those looking for a “safe haven. The silver market has been, and remains, in surplus. 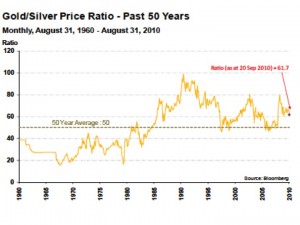 As ETF securities advised in a recent presentation to investors, Mr. Turk’s gold-silver ratio has been to the north of the 50-year average (they use 50 against the Telegraph’s average 60) for much of the last 15 years. Maybe the normal level for silver is in fact closer to the current ratio of 60, and to hearken back to an average with prices in the 1970s and 80s is misleading.

We do not pretend to have a crystal ball on the silver market, but if we had to put our hard-earned cash on the future price direction, we would suggest a large measure of volatility around current levels sounds more likely than any dramatic extension of the current bull run. Silver is not gold, and mine supply and industrial demand still play a significant role in setting the price.

PREVIOUS POST:
Price Fixing Alive and Well in the Freight Forwarding Industry
NEXT POST:
A Tale of Two Metals