Or more accurately a tale of two metals and one country. Brazil has been much in the news this week following comments by its Finance Minister Guido Mantega that there is a currency war going on with countries trying to devalue their currencies in a beggar thy neighbor race to squeeze whatever competitiveness they can from their export machines. One has to have some sympathy for Mr. Mantega, through good management and good fortune Brazil has had a great recession. Yes the economy briefly dipped along with the rest of the world but it bounced back strongly and has been powering ahead for the last year or more. Good management in keeping a close control on inflation, currency reserves and capital inflows – Brazil even came in for praise from the IMF for the management of the economy. Good fortune because Brazil has been riding the crest of a resource wave as exports of iron ore, metals and agricultural products have helped power the country to over 7.5% growth this year. Inflation is edging up but for an open economy like Brazil’s, is still a respectable 4.57% according to Bloomberg, particularly when the labor market is as tight as 6.7% unemployment and falling.

So what has this to do with metals? Well on the back of a robust domestic market both for capital investment and consumer growth, steel demand has been strong. In the first five months of 2010, Bloomberg reports crude steel output rose 56.9% year-on-year to 13.5mn tons, while rolled steel production grew 64.5% y-o-y to 10.8mn tons. The domestic market has supported growth in the Brazilian steel industry, with sales of 8.8mn tons in the January-May period, up 57.5% y-o- y. Apparent consumption of steel was 11mn tons, up 70.5% y-o-y. Imports surged on the back of a strong currency making steel from other low cost sources such as China even more competitive. Imports soared 149.1% y-o-y but even so the country still maintains a steel trade surplus. In such a robust growth market it is no surprise that investment both from domestic mills and foreign is surging. In June, the ThyssenKrupp CSA SiderÃƒÂºrgica do AtlÃƒÂ¢ntico (26.9% Vale, 73.1% ThyssenKrupp) steel mill at Santa Cruz, Rio de Janeiro, was no sooner inaugurated with a production capacity of 5mn tons per annum of high quality low cost slabs than the partners announced they may increase production to 6mn tons. Domestic Brazilian steel groups are teaming up with foreign Chinese mills such as Wuhan Iron and Steel and western firms such as ArcelorMittal to announce new ventures seemingly almost every month.

So what of other metals surely the same dynamics must apply right? Wrong, aluminum production has remained stagnant this year with small increases at Alcoa’s smelter being offset by small decreases at Novelis’s and Albra’s. According to a report in Free Article Directory y-o-y production edged up 1.4% in May but the first five months of the year was down 1.6%. While smelters are clearly struggling, demand is rising as would be expected in such a robust economy (a 24% increase in consumption of aluminum sheets, foil, extruded products and wires/cables). AssociaÃƒÂ§ÃƒÂ£o Brasileira do AlumÃƒÂ­ni (Brazilian Aluminum Association) fears the country could become a net importer by 2014 if investments in new capacity are not made. 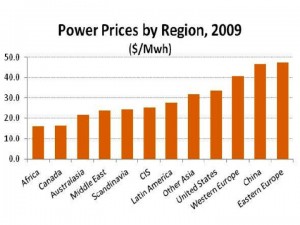 The problem for Brazil is power costs as this graph from CRU illustrates. With imports rising, lower cost suppliers are setting the market price for aluminum in the domestic market and Brazil’s smelters are not able to compete. Smelters are calling for a reduction in power costs and taxation to spur investment but with a rising population placing every larger demands on the countries hydroelectric resources the government may be reluctant to subsidize aluminum production at the expense of domestic supply.

It would seem Brazil has an old world problem in a new world setting.