Steel Production in the US Compared to the UK – Part One

Much is written about the US Steel industry and its fall from preeminence in the latter part of the 1900’s. In the early part of the century, the US had gone through a dynamic period of growth and had already become the largest economy in the world. It produced 37% of the world’s steel and imports did not exist until well into the second half of the century. US steel production had the highest efficiency rates in the world, both due to technology and economies of scale. But the rise of competitors, largely encouraged and sponsored by the US following WWII, saw a gradual rise in imports and as the US economy matured, a comparative drop in the US share of world production.

Likewise, Britain once claimed title to largest steel producer in the world back in 1850 when world production reached 70,000 tons according to a Financial Times article. That piece quotes Britain as having two thirds of global production, but following the invention of lower cost steel production processes, massive steel growth ensued and although UK production continued to rise, the country’s share of global world production dropped to below 20% by the turn of the century as production soared to over 28mn tons. By 1934, the UK had just 10.9% of a total global production of 82.2mn tons and yet in the early 1970’s Britain still ranked 4th in the world. 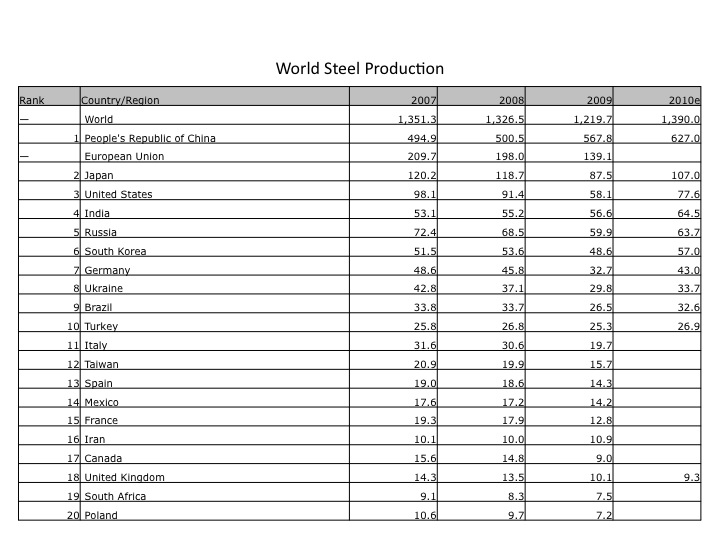 The FT article mentioned above quotes Doug McWilliams Chief Executive of the Centre for Economics and Business Research, saying if Britain achieved greater success in traditional industries (such as steel), the whole economy would benefit. Economists on the other hand argue from the theoretical that steel output in isolation does not matter. To quote Philip Booth, Editorial Director at the Institute of Economic Affairs, “A developing world economy will have continual shifts in comparative advantage. There is no more reason for the UK to be a major producer of steel than a major producer of teddy bears. We suspect this argument though is based on the rather narrow principal of absolute comparative advantage; that if the UK is not the lowest cost producer of a certain product, in this case steel, then it should import steel and focus on making other products where it has an absolute comparative advantage. This is the theory first laid down by Adam Smith, although he just looked at labor as an input cost to the model (as with all economics it comes down to models) it can be expanded to look at energy, raw materials, cost of capital, environmental impact etc.

But even economists would admit that in the real world, the result of allowing free expression of comparative advantage is trade deficits with all that that entails with transfer of wealth and accumulation of currencies from one country to another, as we have seen between the US and China over the last decade. The detrimental effects are exaggerated still further if one or both parties distort the terms of trade by artificially fixing or influencing any of the inputs, such as raw material costs, labor or currency.

From the 1960’s to the 1980’s both the UK and US integrated steel making industries (BOF production method) lost their comparative advantage in steel making in part due to lack of investment in new technology and high labor costs (not to the same extent as the auto industry but relative to the global average). Rising competition from Germany, Japan and later South Korea, much of it supported and developed by the US after WWII, began to challenge US steel making supremacy internationally and following the steel crisis of the 1970’s imports began to eat into the domestic steel industry in the US just as it did in the UK. That is not to say that the whole of US steel industry was languishing in a kind of global backwater, at the same time as US Steel, Bethlehem Steel and so on were having major problems new players were developing the EAF steel making method to a new level, investing in bigger plants and improving the technology such that now they run some of, if not the most, efficient steel making facilities in the world. Coming back to Adam Smith if we had a level playing field, the US EAF producers would have a global comparative advantage, some may even have an absolute comparative advantage. The operative word of course is IF, but we will come back to that.

We will continue this series tomorrow.