The fact is its kind of hard to tell. If you look at their Q2 Financial results they present the data as if they are making US$76 per ton of steel, see table from their recent results: 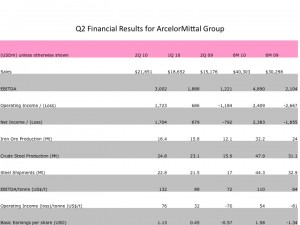 The Sales, EBITDA and Operating Income are presumably taken on the total sales turnover of the group. Yet the same table shows iron ore production at 16.4 million tons in Q2. At current prices of some $140/ton that is $2.3bn, comparatively small beer compared to the quarter’s sales of $21.6bn but significant when looked at from the point of view of net income. Most iron ore assets have a cost of production still in the realms of the long-term iron ore contract prices of the last decade. For example Fortescue Metals, Australia’s newest major iron ore producer is reported in Business Week as having a cost of production just under $35/ton, and even that is significantly higher than the previous quarter due to the strength of the Australian dollar. Iron ore spot prices this year peaked at $180/ton and Fortescue reported an average 2010 price of $125/ton. Taking these real life numbers that suggests a crude $90/ton delta. 16.4 million tons of iron ore at a $90/ton margin is $1476m contribution to the net income. With net income for the quarter only showing $1704m that suggests nearly 90% of ArcelorMittal’s net profits come from iron ore.

Worse with the first half net income only $2383m and iron ore sales of 32.2m tons it suggests steel making ran at a loss of half a billion dollars. It raises the question is ArcelorMittal more of a mining company than a steel company? In terms of activity clearly not, but in terms of earnings per share yes it probably is. At the very least it is misleading to state income per ton of steel produced. The income on one ton of steel is way below the figures quoted.

Maybe a more actuarially minded reader may like to run their slide rule over the numbers and tell me if I am out. The best we can do is run a comparison against competitors. US Steel is a smaller but similarly integrated steel producer currently running a loss of $25m in the second quarter according to Daily Finance even though sales more than doubled from the first quarter to $4.68bn according to the WSJ. The loss is the sixth consecutive quarterly loss for US Steel but to be fair, the WSJ makes the point that the firm has been a laggard compared to it’s peers so may be they are not an ideal comparison for the more multinational ArcelorMittal.

An FT article covers ThyssenKrupp, Germany’s largest steel maker who turned previous losses into a second quarter (their fiscal Q3) profit of $420m on sales of $16bn, but then again Thyssen is a very diversified group involved in many downstream manufacturing and engineering enterprises. However Germany’s economy has been flying this year, led by engineering and manufacturing, just the categories Thyssen’s downstream operations are involved in. One would expect Thyssen’s net profit as a percentage of sales to be higher than under-utilized steel producer ArcelorMittal, but no, AM’s return is three times Thyssen’s at 2.6% as opposed to 7.9%. We suspect therefore that AM’s results are flattered by profits on iron ore rather than the way they are presented from steel production.