Aluminum has had a bull run these last couple of months as this chart from the LME shows: 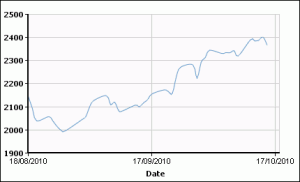 True a fair part of the price strength has been due to dollar weakness and riding on the coat tails of copper. But falling LME inventories and strong physical premiums have contributed to the sense that aluminum is, if not in tight supply, then at least is not as readily available as the falling but still large inventories suggest.

So a less than enthusiastic message from Ben Bernanke last week regarding the economy and the probability of a modest level of QE gave the foreign exchange markets pause for thought and the dollar rallied against the major currencies while the metals promptly retraced a little of their recent gains.   These recent gains in the dollar are giving all the base metals a chance to catch their breath after two months of strong gains. But is this the end of the run buyers may be excused for asking? 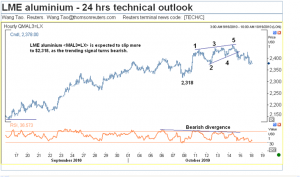 A   Reuters article this week focusing on the technical price movements suggests it is. Wang Tao at Reuters says aluminum’s recent fall back to $2318 per ton is a bearish trading pattern, calling the recent $2459 per ton price a peak and suggesting the rally is exhausted. His chart suggests the price could slide further and although we are not among the technical chartist faithful we would say from a historical perspective given the bounce in the dollar it would be reasonable to expect aluminum along with several other metals to go through a period of consolidation before taking on a new direction next month.

Our own feeling is $2459 per ton could well be a peak for this year and significant movements in foreign exchange notwithstanding it is unlikely to challenge that level again much before the year end. What happens next year of course is a different matter and will be the subject of a later review.