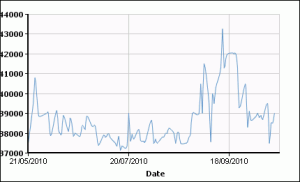 Demand has been good, particularly from Asia where demand for hybrid batteries, catalysts and machine tools has been robust, but also from OECD markets where super alloys particularly in aerospace has been strong. On the supply side, availability has been a major transformation from just 12 months ago as this table taken from data supplied on the excellent Cobalt Institute Ltd. website shows. 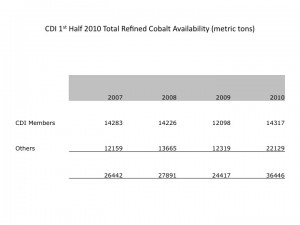 In the first half of 2010, China has increased supply by 125% from the same period last year to 15,532 metric tons. Africa is by far the largest source of raw material with both concentrates and refined metal coming from not just west African states of the Congo and Zambia, but also South Africa, Morocco and Botswana. A Dow Jones report identifies several significant expansion projects underway in Africa and elsewhere which will add high quality supplies to the market in the year ahead. Indeed as a significant portion of cobalt is produced as a by product of copper and other metal concentrate mixes, the strength of those markets will spur new mine development and expansion regardless of the position for cobalt. Tony Southgate a trader with Standard Bank is predicting prices will fall next year as a result. Catherine Virga, director of research at CPM Group is reported in a Reuters Africa article as predicting prices will rise late this year to around $25/lb on supply disruptions in the DRC but then fall next year as oversupply predominates to $18/lb. Subject as it is to applications in fast moving technologies and with supply driven more by demand for mainstream base metals than the demands of the cobalt market, the metal looks set for as a volatile year in 2011 as it has had in 2010.