US Economic Armageddon How Likely?

Though I have yet to see the full merger if you will of social media outlets such as Facebook meld into the b2b world of metals or economics, I sense a growing appetite on personal pages to share articles and news items directly involving politics and economics. A friend of mine who owns a very successful soup and icy retail business here in Chicago recently joined us for lunch. A day later, he sent me a link   to this video asking for my thoughts.

Ordinarily, I would have responded with a “he’s nuts trying to make a buck on going rogue (perhaps I should say contrarian?). But I found myself responding slightly differently. Instead of a “he’s nuts/fringe/lunatic etc I said, “I wouldn’t weight his predictions very heavily but I caught myself not passing judgment regarding the man’s mental health. And the reason for that involves a number of data points that we examine on a regular basis.

What are some of those data points? To start, we follow a blog called Zero Hedge. As a disclaimer, we believe this site operates on the fringe (the main authors all have pseudo-names referencing Fight Club characters) but what I call the “intellectual fringe. As their tagline reads, Zero Hedge On a long enough timeline the survival rate for everyone drops to zero and so despite their rather mysterious identities (they are likely ex Wall Street traders, hedge fund traders, investment bankers, research analysts etc) their body of work appears intellectually sound, interesting and definitely controversial. Check out this post with the title: Guest Post: Is America on a Burning Platform? Except the guest post didn’t get written by “Tyler Durden instead, it came from David Walker, the former Comptroller of the United States from 1998 until 2008. We would highly recommend that anyone with even a slight interest in economics review this piece. Zero Hedge publishes dozens of articles of a similar vein and quality.

Next we turn to our friends at the Consumer Metrics Institute. Founder Rick Davis, whom we often quote, has admitted in a recent report that many believe he and his data represent the lunatic/delusional fringe. The Consumer Metrics Institute uses real-time economic data taken from the Internet and accurately called the 2008 recession as well as the first to see Ëœgreen shoots’ from the economic stimulus programs of 2009. But their data continues to tell a grim story about the state of the US economy. The length of the current economic downtrend is “already 97% as bad as in 2008 and the 2010 contraction has lasted 24% longer than the entire 2008 event without yet starting to recover. The chart below outlines this visually: 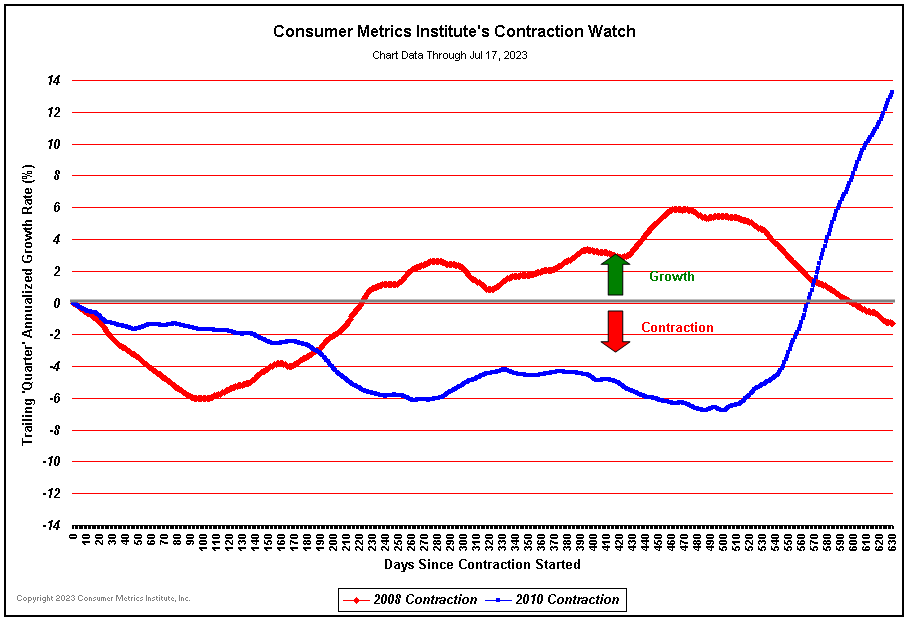 Quantitative easing (e.g. the printing of money) in the hopes of spurring inflation represents yet another sign that our fearless leaders have also read similar economic tea leaves. Do we need to stock up on rations and guns we’d consider that premature but we’re having a hard time swallowing an economic recovery in any form any time soon.