At first blush, the evidence appears quite positive. According to a recent Wall Street Journal article, many US firms have started to see new sales opportunities in overseas markets where previously, they could not compete. Industries ranging from coal to heavy equipment such as cranes and excavators to clutches for industrial machines, tugboats to tool and die have all seen some benefits in the form of increased sales. One might think that a cheap currency ought to solve the problem of the US trade deficit because, after all, much of the debate on China’s currency manipulation involves precisely that the Chinese authorities tinkering with the currency to keep it “artificially low to stimulate exports. We even recently reported one estimate that a 5% appreciation in the RMB results in 50m fewer Chinese manufacturing jobs. So obviously China has an incentive to “manage (e.g. fix) its currency to protect jobs and prevent social unrest. But the situation is not quite the same on this side of the world. First, the US dollar is obviously a freely traded currency. And though the US Fed has decided to embark on a strategy of QE (quantitative easing) the international markets still set the price for the USD.

Second, and perhaps even more significantly, the notion of a “cheap dollar is not quite what it seems. We recently spoke with Dan DiMicco, CEO of Nucor and he suggested that the USD is not actually “low in historic terms see chart below: 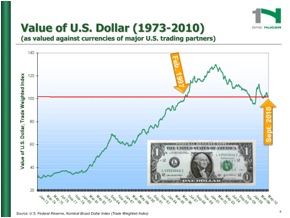 Whether or not one agrees with the idea that the USD is “low historically or not, does not change the fact that currency volatility has added a whole new dimension to global sales strategies, purchasing strategies and even production strategies. Consider the plight of Japan right now. Companies such as Toyota have considered moving manufacturing of some of their lines to the US because the Yen appreciation against the dollar has taken a significant bite into profits. But setting up an auto plant doesn’t involve a simple make vs. buy decision it can take months if not years of planning to shut down a line and re-start one elsewhere, particularly in another country! The WSJ piece sites some comments made by the CEO of Terex, a manufacturer of cranes and excavators as saying, “The volatility is what really kills manufacturing, and though the company hedges its currency risk, it admits that a further drop in the dollar would force the company to re-think its purchasing decisions as well as its manufacturing footprint.

For US companies with a global manufacturing footprint, the rise and fall of the dollar has a smaller impact as any buying/selling in a local market creates a natural hedge. But for companies that today may become more reliant upon export markets for growth riding on the back of a cheap dollar, a time may come when those exports will become more expensive. Solely relying upon a cheaper dollar to fuel export growth may only create some temporary wins. Of course on the flip side, imports become more expensive (a good thing when looking at the deficit) but it also causes input costs to rise negating some (obviously not all) of the benefit of a cheaper currency.

In answer to the headline question, perhaps an additional longer-term strategy involves a combination of requiring countries that signed up to the WTO to play by the rules fair and square as well as a heavy dose of some internal austerity measures on the domestic front to get our own house in order.