Thermal Coal Prices Back on the Rise

A recent Standard Bank note to clients reviewed price movements in the thermal coal market and noted prices rose for delivery into Antwerp-Rotterdam-Amsterdam (ARA), reaching US$98.90/metric ton. ARA is the traditional European benchmark price across the principal import points   for imported coal. In the same way that these ports have become the benchmark for Europe, China has become the benchmark for Asia, Mike Henry BHP Billiton president for marketing is quoted as saying in Business Report.   By comparison FOB prices from South Africa’s Richard’s Bay reached US$90 per metric ton.

Standard Bank put thermal coal’s strength down to two factors. First, investor demand across the energy complex which has been lifted by rising crude oil prices. 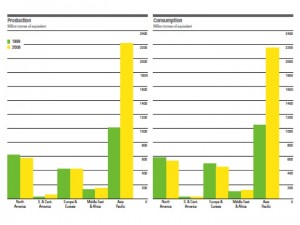 HSBC in their last quarterly Metals & Mining report looks at projections of thermal coal imports forward to 2013 by which time India, already a major thermal coal consumer will be importing as much as China. China is doing much more to diversify its energy sources than India yet the latter is seeing energy demand grow at breakneck speed. Both countries will be at around 100 million tons of imports per annum, not far behind leader Japan at 123 million. Interestingly in this world of growing renewable energy sources, rising environmental concerns and much cheaper natural gas prices following the opening up of shale gas, BP’s annual energy review points out the largest generating energy source last year remains coal at 29.4%. Ironically due to a global retrenchment in energy growth following the recession of 2009 saw the highest proportion coming from coal since 1970. That anomaly is unlikely to continue with so much money pouring into other energy sources but for many emerging markets coal will remain the major energy source for a long time to come and their rising demand will support prices. Standard Bank is expecting 2011 to average US$95/ton but with a gradually rising trend during the second half of next year to $100 per ton FOB Richards Bay, South Africa.

PREVIOUS POST:
Is A Cheap Dollar Sufficient For America to Export Its Way Out of A Trade Deficit?
NEXT POST:
Capital Inflows Destabilizing Emerging Market Currencies and Inflating Asset Prices