For every action there is an equal and opposite reaction, so said Newton when developing his laws of motion. But he could have been speaking about economics (although it is doubtful the great man would have dabbled in such an inexact science). As the Fed ponders the use of further Quantitative Easing (QE2) on top of the $1.7 trillion it has already pumped into the economy spare a thought for the Asian economies, already experiencing rising currencies hitting their export industries and now facing the multiple challenges of massive capital inflows, rising commodity prices and their biggest market China neatly pegged to the falling dollar.

The Asian and some other emerging economies have seen massive capital inflows over the last year and expect the trend to accelerate if more QE is enacted. According to a FT article, net private capital flows to emerging Asia are forecast to reach more than $270bn in 2010 and as much again in 2011, according to the Institute of International Finance. The World Bank and IMF are getting alarmed. Inflows of capital are posing a growing risk to East Asian macro-economic stability, according to the World Bank’s half-yearly review of regional trends quoted in an FT article. 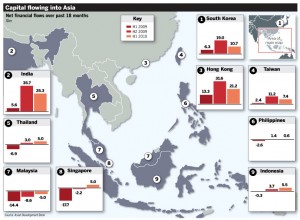 This chart illustrates the scale of the capital flows following the last round of QE. The fear is further easy money will flood towards higher earning Asian markets and create a new Asian crisis similar to the late 1990’s. The inflows of hot money have the effect of driving up the currency. Even the Koran Won which is the only Asian currency still below the US dollar since the onset of the financial crisis rose by 7.6% over the last 3 months and the Korean central bank is spending US$1bn a day to try and keep it down. The Malaysian Ringgit has risen 11% already this year. The Thai Baht has risen 12% and the Japanese Yen 30%.

The incoming funds then look for a home, generally highly liquid assets such as bonds and equities, driving up the local stock market and inflating prices.

UBS believes further QE will result in a boost in commodity prices as a wall of money comes looking for assets as a hedge against a falling dollar and future inflation risks. The impact of that will be to increase inflationary pressures at the factory gate as many Asian economies import raw materials to export finished goods.

Emerging markets have started to impose controls to try to stem the tide. Brazil recently doubled the tax on foreign investment in government bonds and Thailand has imposed a 15% capital gains and interest payments tax on government and state owned company bonds. South Korea has held off so far because they are in the chair for the upcoming G20 summit in Seoul but if a consensus to act in a collaborative manner cannot be found at the summit expect Seoul to implement its own measures after the rest go home.

Capital controls are not a long-term solution. Kristin Forbes at the Massachusetts Institute of Technology is quoted in an FT article saying that evidence from previous experiments with controls is mixed, with no significant impact on the volume of capital inflows or currency appreciation. Controls often hit small and medium-sized companies harder than big ones, and can therefore have serious implications for productivity and growth in countries that rely heavily on SMEs, as many emerging Asian nations do.

A rising currency may be the only answer.

PREVIOUS POST:
Thermal Coal Prices Back on the Rise
NEXT POST:
With Steel Demand Rising, Uncertainty Still Reigns in China