MetalMiner is pleased to welcome our newest commentator, Taras Berezowsky.

China steel prices appear to be on an upswing at third quarter’s end, but going into Q4, there is still much uncertainty about exactly where prices will be by the end of 2010.

Based on MetalMiner’s latest IndX, as of October 1, most metal types experienced a slight increase [see below]. For example, rebar was up nearly 8 percent from September 1. 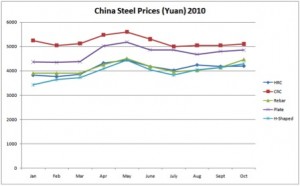 The slight increases do not necessarily indicate that prices in China, and by extension, much of Asia, are less affected than those in the U.S. As MetalMiner makes clear in its Q3 report, “the US market does have more price protection for raw materials than either Asian or European steel markets.

Though US steel price momentum remains uncertain, China may head toward a slightly different trajectory. News lately has focused on China’s crackdown on oversupply. By shutting down several mills entirely (though temporarily), and decreasing steel production overall by 70 percent, the move was seen as necessary to spur future demand in the Asian market. Now, according to sources, production looks to be restarting.

The Steel Index reports that spot iron ore prices reached $151/ton for 62% Fe fines. Prices have increased 11.5% over the past four weeks.

In a recent Reuters article, Manolo Serapio, Jr., writes that [Australian bank] ANZ said reports that China may be easing power curbs on steel mills “sets the scene for a boost in positive sentimentÂ¦

Raw materials prices, especially iron ore, will no doubt be the primary drivers for increased steel prices. However, China, the biggest iron ore buyer in the world, will encounter market volatility here, as evidenced by the recent iron ore conference in Dalian.

Ian Christmas, the World Steel Association’s director general, quoted by Reuters at a news conference in Tokyo, sees uncertainty here as well. “There is no doubt a very short-term volatility in steel prices coming from raw material prices gives us and customers some issues, he said.

Global steel demand may just be the most important indicator. Demand is set to rise 13.1 percent to 1.27 billion tons this year, higher than an earlier forecast of 8.4 percent growth, according to the Oct. 4 Reuters report. Even Ukraine, the world’s eighth-largest steel producer, has seen sizable increases in crude steel output this year, with 33.5 million tons projected for 2010.

“We are in a transitional period: emerging economies like China, India, Latin American countries and Russia are bolstering their shares in steel output and consumption while demand in developed economies remains in the doldrums,” said Hajime Bada, president of the world’s No. 5 steelmaker, JFE Holdings Inc.

As long as demand in nations such as India stay strong, domestic consumption remains hearty the IMF projects 10.5 percent growth in 2011 and the real estate market is kept under control, China’s steel prices should stay steady.