Home | Non-ferrous Metals | Lead, Surprising on the Upside but For How Long?
Market Analysis

Lead, Surprising on the Upside but For How Long?

Lead, along with zinc have not been as much in the news of late and while prices rose this month along with the whole base metals complex on a weaker dollar, the heavy metal has been very much in the shade of copper and tin. News late this week of a Chinese smelter closure gave a boost to prices and something of a shock to the market as record Chinese production numbers in September were announced around the same time. The smelter in question is Zhongjin Lingnan’s Shaoguan lead and zinc smelter in Guangdong province according to a Standard Bank note to clients, and although details appear uncertain the belief is the smelter has been closed due to excessive levels of thallium – a highly toxic metal – in the Beijing River. The smelter has a capacity of around 270 ktpy of zinc and 115 ktpy of lead, accounting for around 5.5% and 3% of Chinese production respectively according to Leon Westgate at Standard Bank.

At the same time, Reuters is quoting data from the National Bureau of Statistics that state lead production reached 421,000 tons in September, up 4.2% on the previous record in August and 19.3% from the same month a year last year. Chinese year to date output is over 3 million tons, up 4.5% over the same period in 2009. The increased production is due to improved concentrate supplies and smelters coming back after maintenance close-downs and refurbishments extending capacity.

So what does this increased production mean for the global lead market? Can we expect prices to fall as a result of improved supply? Well first, although China is the world’s largest lead producer, accounting for over 40% of global production according to Credit Suisse and Brook Hunt, it has not been a lead exporter since about 2008 and is unlikely to be with Beijing’s focus on energy use and environmental impact. By the application of export taxes and similar incentives, Beijing will ensure China remains neutral or a small net importer of refined metal. China is however a major importer of concentrate, imports of which have suddenly surged again after several months of decline while Chinese consumers run down stocks.

There is some softening in the demand outlook for refined lead however. 80% of lead is used in the battery industry and 57% in autos. China’s growth in vehicle production has been slowing since April and Credit Suisse notes utilization rates at e-bike manufacturers has fallen since the beginning of this year. Auto manufacture in OECD markets has remained more robust than many expected when stimulus support was removed but still cannot be said to be strong. Stimulus support for car buyers has just been withdrawn in China and evidence in Europe suggests this will result in a sharp slowdown in vehicle sales. Replacement battery sales will continue and increasingly become a major component of the market as those cars and e-bikes require replacements.

Lead concentrate supply is a mixed picture. In China, mine supply has surprised on the upside this year but over the medium term production could decline as the government seeks to consolidate the highly fragmented industry for environmental, safety and energy consumption reasons. Globally supply is more than adequate at the moment but towards the middle of the decade large mines in Australia and Canada will be at the end of their lives and at present there is nothing to take their place. 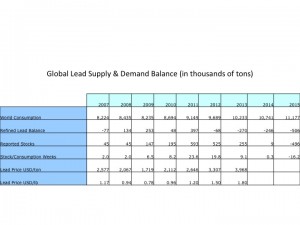 The following table taken from Credit Suisse data summarizes the current and go forward position for consumption, refined lead balance, stocks (LME) and price. We include the reference to the LME in brackets because producers and consumers also hold significant inventory. Last year for example when the LME averaged some 147kt, producers held an estimated 135kt and consumers a further 106kt. But it is fair to say if either got seriously out of balance with the other the LME would be the bell-weather displaying the underlying state of the market.

There is considerable uncertainty about many of these estimates. Domestic Chinese mine production has a significant +/- to it, as does demand from automotive and e-bike batteries. There could well be a softening in demand in Q4, 2010 and Q1, 2011 as demand eases in China and western markets remain flat. Current prices probably already factor in much of the upside for the first half of 2011 but as H2 2011 unfolds, a growing tightness should unleash further speculative buying that will be needed to justify mine expansion in the years ahead.

PREVIOUS POST:
Blending Old-Growth Forest and Modern Metals: Architecture of the Pacific Northwest
NEXT POST:
Why Do Turkish Steel Scrap Purchases Have Such a Big Impact on the US Steel Market?