Home | Commodities | Why Do Turkish Steel Scrap Purchases Have Such a Big Impact on the US Steel Market?
Market Analysis

Why Do Turkish Steel Scrap Purchases Have Such a Big Impact on the US Steel Market?

As we continue to develop our coverage of the steel industry, we find ourselves struck by the number of enigmas we encounter in our research. For example, about ten days ago, my colleague Stuart wrote a two part series examining the steel industry from a US and UK perspective. In that second post, Stuart rattled off a number of countries that export an excessive amount of steel tonnage when compared to the size and demand for steel within those local markets, “according to the ISSB, the former Soviet states of Russia, Ukraine and Kazakhstan collectively import 3 million metric tons, internally trade just 8 million metric tons but export a whopping 49 million metric tons. Though Stuart’s post did not mention Turkey specifically, Turkey clearly exports a significant amount of steel in proportion to its own local demand. Consider the following data from the World Steel Association: 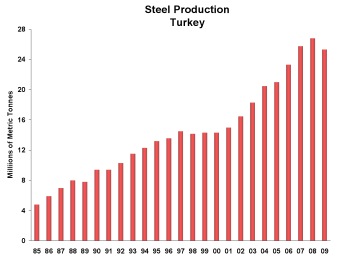 US steel demand, typically in the 100+ ton range, has slipped to between 58 million metric tons in 2009, due to the economy whereas Turkey’s production reached 25 million metric tons despite the fact that Turkey has only one quarter the population as the US. According to H. Metin Surmen from Traxys Europe S.A (a raw materials trading company), “ Turkey has always been a steel producing country which has produced more than its consumes. Turkey has to export its production and manage its product range wisely.

Now let’s turn to the method of steel production. 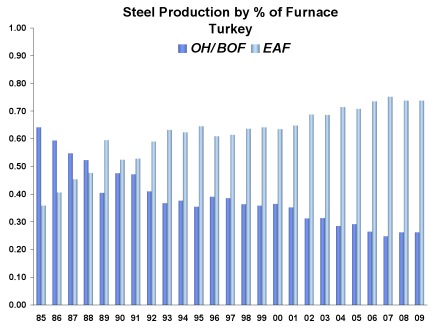 Examining Turkey’s exports, we’ll let you draw your own conclusions: 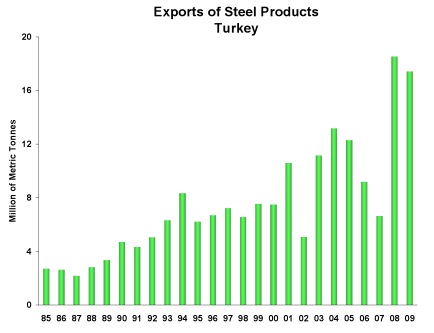 It is no surprise to see how Turkey’s purchases of scrap (most of it coming from the United States) drives scrap prices on the world market. Although ferrous scrap prices have declined this month by $25-34/gross ton for obsolete grades and $55/ton for Chicago bushelings, according to ISRI, fresh Turkish scrap buying may drive US scrap prices higher.

And though steel price momentum appears to be moving in a downward direction (and many analysts have revised their forecasts lower as we will we with our fourth quarter price perspective), Turkish scrap purchases do impact domestic scrap price levels. If we see some Q4 scrap purchases from Turkey, we suspect the scrap numbers to increase domestically lending some support (although perhaps limited support) to steel prices here. Stay tuned.

PREVIOUS POST:
Lead, Surprising on the Upside but For How Long?
NEXT POST:
High Mix Low Volume Manufacturers Can Reduce Both Costs and Commodity Volatility