This is the second of a two part series. You can read the first post here.

Although zinc does share alloying applications with copper in brass and bronze making, by far the largest use is in galvanizing. In Europe and the US galvanized steel in the construction industries has remained in the doldrums since before the financial crisis. Consumer goods sales have picked up in 2010 over 2009 but are still below 2007 levels. Only in autos have sales improved and although not back to previous peaks, autos offer a relatively steady market in spite of the demise of clunker programs. However auto sales in Germany have eased recently and with austerity measures about to be introduced in the UK auto sales are set to fall there too so the outlook in Europe is not strong. In emerging markets however cars sales are growing robustly. Although infrastructure and construction spending may slow from the dizzy rates of H2 2009 and H1 2010 in China they will continue to grow, as will activity in India, other parts of Asia, Brazil and even Russia. Credit Suisse notes a high correlation between auto production and zinc consumption so JD Powers’ projection that auto production capacity in China could reach 31 million vehicles by 2015 promises strong ongoing demand for galvanized steel and hence zinc. Both banks expect both refined metal supply and demand to rise as this table shows. 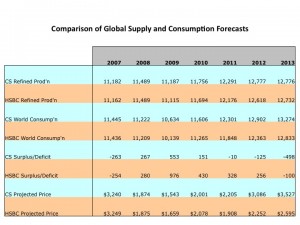 Where the banks differ is in the level of demand, Credit Suisse being consistently more bullish in the years ahead and projecting a greater deficit by 2013. If refining capacity is restricted as current trends and plans suggest, and demand continues to rise in Asia and with some lag in developed markets then Credit Suisse’ scenario of a deficit in refined zinc supply would logically lead to a tight supply market and higher prices. If however HSBC’s scenario of continued excess mining capacity and sufficient refining capacity is proved to be closer to reality then the more likely result is a continued growth in exchange inventory levels and only moderate advance in prices.

China’s car growth is unlikely to be linear, all markets go through periods of surge and consolidation. In spite of continued investment in new car production in China, the market is over ripe for consolidation and this will be encouraged by Beijing who is looking to encourage fewer globally sized national champions. There is even the risk of over capacity and a bubble in auto production capacity but either way current growth rates of 40+% are unlikely to continue. So demand growth is likely to moderate in China. The question is will this be before demand picks up with any degree of momentum in developed markets?

Nor on the other hand can we see long-term zinc refining remaining in deficit in China. If prices remain around current levels and zinc refining remains profitable, power targets or no we would expect to see new more energy efficient and less environmentally damaging capacity being added. Nor is Beijing going to prevent investment if the alternative is imported refined metal. So metal price not withstanding we would expect China’s refining deficit, if it appears, to be temporary.

Given that our expectation is prices will remain above $2200 per ton but below $2650/ton in 2011, that’s a pretty wide band but the market has been extremely volatile and the announcement of further smelter closures or introduction of a physically backed zinc ETF, while not expected in the short term, could have significant impact on the market. For the next 6-9 months though watch emerging market demand, steel and auto production. It will likely be some time before western markets activities make a significant dent on the zinc market again.