Sometimes we get so wrapped up in the big picture that it becomes tough to see the small things that we can appreciate on a day-to-day basis. Below is a roundup of some attention grabbing metal devices that may have flown under the radar, but can definitely make our lives just a little bit easier or interesting on a micro level.

Stanley’s Tape Measure gets an update.

How annoying is it when you want to measure the length of a wall, and the tape measure keeps falling down because the hook won’t stay put on a horizontal surface? After years and years of frustration, Stanley made one small change that’s making a world of difference.

“The key difference is just a few fractions of an inch of metal added to the end hook, so not only can you catch surfaces above and below the tape, you can even hook it on the side–invaluable for when you’re trying to measure off a wall corner and keep the tape horizontal so it doesn’t collapse. Genius!

After losing a beloved dog due to a chewed, frayed leash, Joslin Larson developed ones that dogs literally can’t break.

Known for being strong yet lightweight, aircraft cable is a type of steel wire rope used in aviation as well as other industries. Larson uses a particular type of aircraft cable that can withstand a weight load of more than 2,000 pounds. “What I found out is that dogs don’t have the right incisors to cut steel,” Larson says of the aptly named Vir-Chew-Ly Indestructible dog leash.

Looking for a unique business card?

Though more aesthetic than practical, I have to admire this thin metal business card that can fold out into a 3-D object by Sam Buxton. “The cards begin as a standard flat piece of sheet metal, then fold out (similar to origami) to create a mini scene with a worker and workspace.

You’ve seen the ugly, plastic taxi toppers of today. They get cracked, weatherworn, and their advertisements are barely readable. Bluemap Design decided it was time for a change. 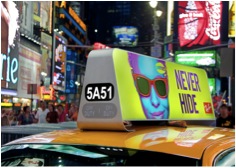 Not only does the new topper look pretty slick, but it boasts LED lighting, “providing low energy consumption and working in tangent with effective digital graphic reproduction processes. The aluminum frame can withstand the heat of a NYC summer and the cold of a NYC winter — and doubles as an antenna. “EMI emissions from the board are lower than ever before. What’s that mean? There’s less radio interference, and your iPhone works better.