A recent article in WalesOnline is one of many that have covered research being done at the UK’s Swansea University in cooperation with Corus (now Tata) Steel, photovoltaic (PV) specialists Dyesol and others into the possibility of coating steel sheets at the point of manufacture with materials that will generate electricity essentially making the steel panel or better still the whole roof structure one huge photovoltaic cell. 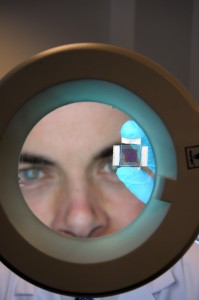 The article explains the process as spraying a solar cell onto the steel surface and of course holds open the possibility of powering the building itself and the sale of surplus power into the national grid. Government is backing the idea in the form of a £9.5m ($15m) grant from the Engineering and Physical Sciences Research Council for further research and Corus (Tata Steel Europe) is the lead industrial partner working with the University in developing the concept.

The technology sounds almost too good to be true so we caught up with Robert Dangerfield, Communications Manager at Tata Steel in Wales to find out a little more detail. Robert confirmed the project is ongoing but research into PV surfaces is only part of a wider program called SPECIFIC that is looking at various coating technologies with a view to bringing them to commercial reality. The project is looking at various ways in which PV coatings can be applied, used and interact with both the sheet and the wall or roof insulation. SPECIFIC as a project is likely to run for at least 5 possibly 10 years but as the original article pointed out the PV roll coating technology is going into site trials at Tata’s R&D facility at Shotton where the firm intends to cover several hundred square feet of roof space to trial the technology. As Dangerfield explained, the PV sheets are not expected to be a direct replacement for conventional silicon based PV panels, rather they have a more modest in the region of 10% efficiency compared to 30+% efficiency for modern PV panels but because of their much lower cost can cover a far greater roof area generating electricity at lower cost and without the need to use unsightly panels attached to the roof surface.

Patents have been applied for so the partners are serious about bringing this to commercial reality. As to when industrial and agricultural buildings will be re-roofed with the new panels remains uncertain at this time but a comment by Dr David Wormsley, of Swansea University succinctly underlines the potential, “Corus Colours (Tata Steels Coating Division) produces around 100 million square meters of steel building cladding a year. If this was treated with the photovoltaic material, and assuming a conservative 5% energy conversion rate, then we could be looking at generating 4,500 gigawatts of electricity through the solar cells annually. That’s the equivalent output of roughly 50 wind farms.” and not a windmill in sight!