Coking coal prices have been relatively steady these last few months but a number of factors are likely to converge to force a small rise in integrated steel producers coking coal costs early next year.

Reuters covered the impact of the weak dollar on coal producers profit margins and the upward pressure this is putting on prices.

With the exception of Indonesia, the top five coal exporting countries count the cost of mining and moving coal to ports in local currencies but sell coal in U.S. dollars per ton. As the dollar has weakened relative to the Australian dollar, South African Rand etc coal producers revenues in local currencies have come under pressure.

China is by far the world’s largest consumer of coking coal but because it is also a significant producer it is (surprisingly) not the largest sea borne importer. That distinction goes to Japan where coking coal imports are expected to bounce back next year to 56m tons, just short of the 2007 peak of 57m tons. This year South Korea and India will swap places for the honors for second place tying at about 24 m tons each but demand in India is rising much faster and according to Credit Suisse and the World Coal Institute, Indian consumption is likely to hit 38mt by 2013.

BHP Billiton and Japanese steel mills have agreed to a Q4 price of US$209/ton, representing a 7% reduction from Q3 while Australian coking coal prices have dropped some 16% since May on a like for like FOB basis on weaker demand. However only part of the reduction is due to the steel market itself. Chinese steel production got ahead of itself this summer and with considerable overstocking went through a period of inventory run down with steel producers trimming production. HSBC expects that process to have worked its way through by Q4 and hence is looking for an increase in raw material demand again. Independent of that process is the rise of a new supply source to China in neighboring Mongolia. From almost zero 18 months ago, Mongolia has become a significant coking coal supplier to China rising 291% year over year to 8.48mt in the Jan-Aug 2010 period. 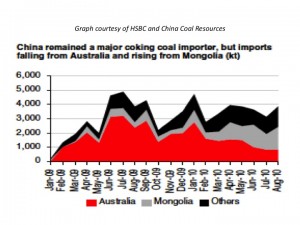 Credit Suisse in a recent report to clients listed a number of factors likely to restrict coking coal supplies and hence support prices. Australian producers have already experienced floods that have delayed shipments and hampered removal of overburden at mines according to the WSJ. Approaching winter weather will likely limit production in China and Russia and shortages of rail wagons in that country are already impacting exports. On the demand side, Indian steel producers are adding blast furnace capacity and the market is now restocking following the monsoon period, while South American and South Korean capacity additions will add to global demand.

As a result, Credit Suisse is expecting moderate price increases towards the year end of about $5/ton and prices to hold through 2011 on a tighter supply market. In themselves price increases will not put upward price pressure on mills but with iron ore prices set to ease late this year and next producers may have been hoping for a similar fall in coking coal prices.

PREVIOUS POST:
Are Rare Earth Metals the Next Bubble – In the Tradition of Tulips, Dot-Coms and Housing?
NEXT POST:
A Power Station on Every Roof – Tata Steel Develops Solar Steel Panels