Success in securing steel import restrictions has encouraged the United Steelworkers and a number of producers to push for similar measures against Chinese aluminum extrusions. Coming fast on the heals of US countervailing duties announced in August ranging from 8.18% to 137.65%, the US Department of Commerce announced last week that they would set preliminary anti-dumping duties on imports of aluminum extrusions imported from China. The duties have been set at 59.31%.

The action was initiated and funded by the United Steelworkers and Aluminum Extrusions Fair Trade Committee in March and had the active support of a group of U.S. producers a Reuters article says, including William L Bonnell Co, Hydro Aluminum North America, Kaiser Aluminum Corp and Sapa Extrusions Inc,  The US producers complained that Chinese imports undercut their market and depressed prices pointing to an increase in imports from that country from $306.8m in 2008 to $513.6m in 2009, a 67% surge according to a Global Times article. Another article quotes the WSJ as saying in 2007 China controlled just 8% of the U.S. aluminum extrusion market, a share that jumped to 20% last year. Over that same time, the WSJ says, prices of Chinese imports of aluminum extrusions have fallen 30 to 50%, figures that could be a little misleading. For a start if the US extrusions market is worth some $3.57bn then $500m is 14% not 20%, but arguably it could mean 20% of a particular sector. 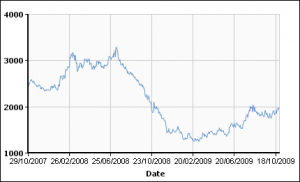 Second, all aluminum prices have dropped from 2007 to 2009 due to the fall in the underlying price of aluminum ingot as the chart above shows.

Nevertheless it is almost certainly a valid point that Chinese imports at a time of relatively low domestic mill utilization will only have been able to compete on price and as such will have had to undercut domestic mills in order to grow market share even though a proportion of the increase from 2008 to 2009 will again be solely due to the rise in the ingot price over the time frame discussed, 2008-9. What is interesting is that as with similar announcements made recently on steel, currency is now being accepted and used as an appropriate example of subsidy. As we have argued for some time, the Chinese are clearly rigging the system by keeping their currency artificially low, just as Britain did in the 1650’s, the US did in the 1800’s, and as Japan and South Korea did in the latter part of the last century. In one form or another, all mercantilist states have implemented protectionist measures in the development stages of their economies. The twin problems for China are that first the country makes up such a significant part of global output that such actions cause severe trade distortions and second that in this century we (including China) have all signed up to WTO rules that make such actions illegal. While economists may argue about what is a realistic level for the Renminbi against the US dollar, none would argue that it should be higher than it is now.

These recent duty decisions will not stop imports from other countries but arguably China is one of the lowest priced and as such domestic US extrusion prices should rise in coming months helping those extruders that have found themselves under pressure. Now that the US Department of Commerce is de-facto accepting that China is manipulating its currency, you have to wonder how much longer it can pursue this policy of hypocrisy in implementing duties on the basis of currency manipulation on the one hand but failing to call China a currency manipulator on the other.