As we head to the polls today in this important mid-term election, we wanted to take the opportunity to once again highlight some of the key policy platforms as well as specific pieces of legislation (and in some cases regulation) likely to impact manufacturing and metal buying organizations. We have covered many of these policies in recent months on MetalMiner and have recapped a few of them and added a few twists.

Plank One: Strong Manufacturing policy to drive job growth – We have often discussed a series of federal policies some positive and some negative that will or would have a lasting impact on the ability of corporate (or small businesses for that matter) to positively impact the job situation and stimulate growth (including export growth which we will come to in a moment). The policies include:

Plank Two: Energy policy we could probably write ten posts on energy policy. Instead we’ll link to one that examines the facts behind an average (dare we say typical) American’s energy consumption and what that means from a policy perspective. Carbon cap and trade legislation, despite not having passed during this last session of Congress could get passed during a lame duck Congress. The uncertainty around energy policy (among other uncertain policies) continues to mute economic growth.

Plank Three: International Trade policy – We take a page from the Consumer Metrics Institute, with its analysis of GDP and in particular, some recent conclusions on the impact of X-M (exports imports) on overall trade numbers. First the GDP equation:

But look closer and we see that tremendous impact the trade balance/deficit has on overall economic numbers: 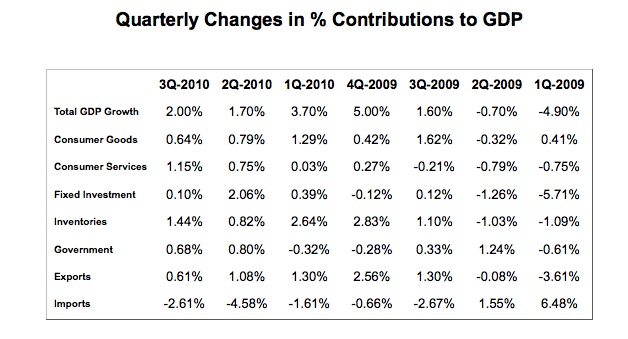 According to the Consumer Metrics Institute, “One of the real eye-openers in the above table is how much the export-import portion of the equation (“X-M”) has impacted the headline growth number over the past seven quarters. For the newly reported quarter the net contribution from foreign trade was -2.0%, as contrasted with a -3.5% number for the prior quarter — resulting in an improvement of 1.5% in the foreign trade contribution relative to the prior quarter.

But we’d caution readers not to get overly excited. The export numbers have declined for three consecutive quarters. Any improvement has more to do with a slowing growth rate of imports that as our friends at ISRI have pointed out to us, tend to go hand in hand with weaker economic activity. And with that a slew of policies aimed at re-balancing the trade situation (see our follow-up post this afternoon).

Much is at stake this mid-term election cycle. Vote wisely!