Reuters reported some bullish comments emanating from an industry conference in Ningbo China this week. Taking the long view, a director at the Ministry of Industry and Information Technology predicted a 25% rise in Chinese copper consumption by 2015 from 2010 demand forecasts. Zhang Fengkui at the Ministry’s Non-Ferrous Metals department said consumption would rise to 8.5 million tons from current levels estimated by Antaike, a state backed analyst, at 6.8 million tons. Consumption this year has been held back in the second half by power cuts imposed as part of Beijing’s drive to meet power consumption and emission targets, consumption that is expected to be made up in the first quarter of next year when controls are relaxed. For Zhang Fengkui to specifically identify power, car and home appliances as the main drivers of increasing demand suggest the state has factored in significant growth into these sectors as part of its new five year plan starting in January.

Analysts differ as to the underlying state of the copper market. All agree that demand growth in OECD markets has been mixed with western European re-stocking strongly in H1 2010. 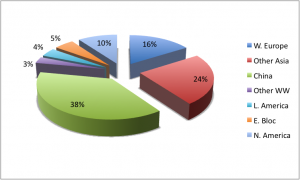 North America and Western Europe combined make up only 26% of global consumption against 62% from China and Asia, never mind the rest. So if Asia grows 5% it’s much more significant than OECD demand rising 5%, explaining why predictions of China’s growth are so noteworthy.

Indeed the two drivers this year have been the behavior of the LME and perceptions of the supply-demand balance particularly as it relates to China. First, the LME. Credit Suisse sees the draw down in LME stocks as evidence of physical demand exceeding supply, that is of the market being in deficit. 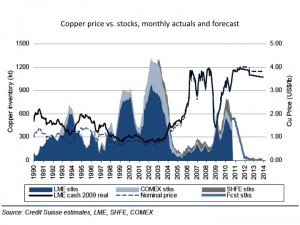 As this chart shows inventory not just on the LME but Comex and the SHFE has fallen since the start of the year and in Credit Suisse’s opinion has been in deficit all year with the normal summer seasonal slow down that would historically manifest itself in rising stocks not occurring   in 2010. Indeed after a slowdown in September, draw downs have picked up again since, supporting prices in Q4.

We will continue with our analysis in a follow-up post.