This is the second post of a two part series. You can read the first post here. 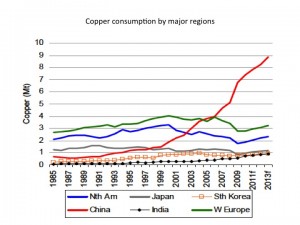 Copper demand in all parts of the world is expected to rise in 2011-13 but growth rates will be highest and overall demand greatest in China as this graph illustrates.

So if demand is forecast to rise at these levels is mine supply able to support it? No major mines are due to come on stream over this period but at a conference held in August, Credit Suisse concluded most mine development would come in the smaller 50-200 ktpa range which makes the supply market much more sensitive to prices. Continued high prices will support ongoing small mine start ups, but a softening in prices could undermine a significant number of projects for which finance is often more precarious. Continued high prices will also support copper scrap markets, which will help to support supplies particularly for China, a big scrap importer, but also for smelters in Europe which have already increased scrap intake to try and offset a scarcity of concentrate this year.

Not everyone is so bullish on prices however. HSBC, typically more conservative than some, sees the copper market in 2010 as having been in balance and is expecting prices to ease back from current levels by year end. As the bank points out, copper has never averaged more than $8000 per ton for more than 5-6 weeks and an annual spot average that high would require spot prices at record levels, which could cause demand destruction. What does the financial services industry say in their small print past performance is no indication of future returns meaning just because it did or didn’t happen in the past is no reason to say it will or will not happen in the future. HSBC realistically makes the point that 2010 demand was a cyclical recovery to the 2009 recession and that a large part of western world demand has been re-stocking. Price strength has been a combination of investment funds taking a view on future demand and limited supply, supported by falling exchange inventories and the simultaneous weakening in the US dollar resulting in a flight to commodities as a hedge against further dollar weakness. How much more money is there chasing the same holy grail?

Which brings us to conundrum that is the copper market in 2011. Clearly demand is strong and is likely to stay in growth mode although with western supply chain re-stocking now well underway and Chinese growth solid but lower than in 2009/10 not at the rate of the last year. Mine and concentrate supply is constrained but probably sufficient with increased scrap supply. The question is how much of the bullish growth picture and constrained supply position is already factored into current prices?  The world’s major money managers appear to be betting the run has further to go, investing in copper miners only makes sense if you feel prices will remain solid in the longer term. Blackrock, the world’s largest global investment fund, is overweight in only two metals sectors copper and iron ore according to a Reuters report in Mineweb. We have underestimated the China influence on rather too many occasions over the last two years and would be hesitant to do so again but we struggle to see further upside to current prices of $8300-8500 per metric ton, let alone Credit Suisse’s $4/lb or $8800+, but with further dollar weakness possible, the risk seems more on the upside than on the down-side.