I think it’s safe to bill Nov. 3 as “Double-Whammy Wednesday.

While the Republicans are basking in the first day of their win of the House in U.S. elections yesterday, the Federal Open Market Committee made a watershed announcement earlier today to undergo another round of QE. The Fed will buy up $600 billion in bond assets by the end of the second quarter of 2011, according to their press release.

The total amount is $100 billion more than predicted by most economists, and will very likely spur commodity prices upward.

Due to speculation that QE2 was looming, the dollar has lost about 7 percent against a basket of currencies over the past two months, according to an article in a Reuters report. Bill Gross, manager of the world’s largest bond fund PIMCO, told Reuters in a separate article on Monday that “the dollar risks losing 20 percent of its value over the next few years as a result of further heavy spending by the Fed. Against the Euro, the dollar has been steadily decreasing leading up to the Fed’s decision, as the chart below shows: 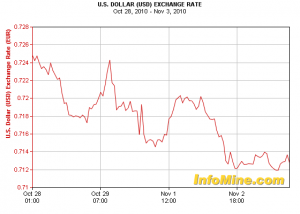 If the dollar weakens further, metal prices will almost certainly rise. Certain metals have experienced significant appreciation, and there’s no reason to think copper, for example, won’t go up due to a weak dollar and the existing supply-demand landscape. Upward trends will likely continue:

From a metals standpoint, copper and aluminum are sure to lead the way now that the Fed’s stimulus will likely drive the dollar’s value down. Frank Lesh of Future Path Trading in Chicago, as quoted by Reuters, said, “With the right news, I think copper wants to trade back to $4.00 (per lb). Initially, a lot of free money would buoy prices. The more free money, the better.

Although it has been reported that Fed chairman Ben Bernanke doesn’t seem concerned over inflation, the threat is hardly gone. According to the Fed’s release, Thomas M. Hoenig, the only member on the committee voting against the policy, cited concerns over long-term inflation. Many investors are leery, to say the least.

Such inflation fears pervade the global marketplace as well. The UK, says Bloomberg’s Matthew Lynn, must be extra cautious. “The U.K. central bank should forget about printing more money through the purchase of securities, he writes. “That is the last thing the economy needs. Instead, it should concentrate on the real problem: an inflation rate that is fast getting out of control. The rest of Lynn’s article highlights the danger the U.S.’s economy could find itself in very soon.