A lot of things have been going wrong in the marketplace for Rolls Royce. Their share price fell a bit more than 5 percent today on the LSE in the aftermath of Qantas grounding their half-dozen Airbus A380s. But stock price seems a more near-term hiccup as opposed to the potentially systemic failings of their jet engines. The malfunction may came down to a rather small but not insignificant metal part upon which the propeller is mounted: the rotating spline.

Splines are defined simply as a series of grooves that fit into a shaft to transfer torque: 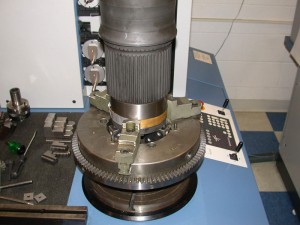 The real issue at hand in the Qantas accident may be the wear and tear noticed on the splines. Aviation Week reported that an airworthiness directive had been issued for Rolls’ Trent 900 engine back in January by the European Aviation Safety Agency.

“As the shaft-to-coupling spline interface provides the means of controlling the turbine axial setting, the wear through of the splines would permit the IP turbine to move rearwardÂ¦This rearward movement “would enable contact with static turbine components and would result in loss of engine performance with potential for in-flight shut down, oil migration and oil fire below the [low-pressure] turbine discs prior to sufficient indication resulting in loss of [low-pressure] turbine disc integrity, the article explained.

Clearly, metal factors into the airline industry, in several industrial metals that we cover play crucial roles. Jet engines are made from various alloys of steel, stainless steel, nickel, aluminum and titanium. In fact, according to Rolls Royce’s Web site, the fan containment system in their engines is the first to be manufactured from titanium and does not need the additional Kevlar wrap (which has become more common than the alternative, fiberglass), making it a lighter and smaller system.

In recent years, there has been a significant rise in the demand for titanium and titanium alloys. The price of commercially pure titanium (CP) has risen sharply since 2003, from $15.00 per lb to $50.00 per lb., according to All Metals & Forge Group.  The price remains up as we head into 2011. 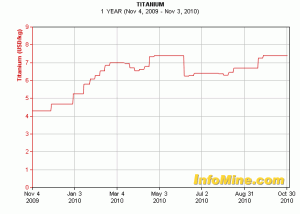 But Rolls has been under fire for the performance of a number of their latest products. On Aviation Week’s Things With Wings blog, Robert Wall reported that Rolls has experienced several setbacks with their Trent 1000 engine, among other things.

To put this into context, Rolls is the world’s second-largest jet engine manufacturer, and the majority of Airbus’s A380 line uses the Trent series engine.  (The company supplies to Lufthansa and Singapore Airlines as well.) If engine manufacturers like Rolls continue to experience trouble with their products, what could it mean from a design and development perspective using metals? Only time will tell, and we’ll keep an eye on it.

PREVIOUS POST:
MetalMiner Steel Market Pulse Take The Survey!
NEXT POST:
QE2: In the Currency Game, How do You Play With a Cheater?