Uranium Price Powering Ahead and Likely Has Further to Go

Uranium is a metal we do not cover very often but as a material with a key role in power generation and an active spot market it deserves periodic review. Interestingly the market has been moving up. Just last month a Bloomberg article called out advice from Macquarie Group of significant risk of higher prices in the event of supply disruptions. At the time, uranium prices were $4548/lb but since then and even though there have not been any supply disruptions Industrial Fuels & Power reported prices are now at US$ 53.50/lb and annual sales volumes up a third over 2009.

The US tends to look at nuclear power as a sunset industry because reactor construction ceased after the Three Mile Island incident but in some parts of the world, massive nuclear programs are underway, seen as a way to limit carbon emissions and environmental damage from coal. Credit Suisse reports China has 24 reactors under construction about half of which were started in just the last 12 months. China’s target for installed nuclear capacity is 70GWe by 2020 and with only 11 reactors providing 8.6GWe at present, the program will require around 60 new builds. According to the World Nuclear Association such build rates are not unprecedented. During the 1980’s, the world was adding one new nuclear reactor every 17 days, including 47 in the US, 42 in France and 18 in Japan. 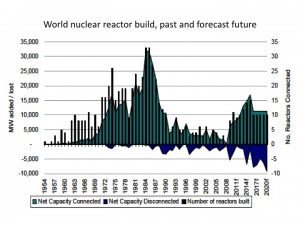 In spite of planned reactor new builds of course a number of those old reactors are now coming to the end of their life and as in the UK will be replaced later this decade. To some extent closures will mitigate new builds so that the sum of new capacity added each year will drop as the decade goes on. Even so total nuclear generating capacity is estimated by Credit Suisse as likely to rise from the current level of 373 GWe to approximately 425 GWe by 2014 and 495 GWe by 2020, representing annual growth of about 3%.

Nevertheless UxC, a nuclear industry consultant, and CS estimate prices will rise next year to average $55/lb in H1 and US$60/lb in H2, before powering on to $70/lb in 2012 and 2013. Reactor closures will not begin to significantly feature in removing demand until the second half of the decade by which time mine expansions in Kazakhstan should increase supply and bring prices down slightly the bank says. However, doubts still exist as to the cost model for as yet undeveloped resources around the world and with emerging nations increasingly turning to nuclear power a long-term price of at least $60/lb is expected on solid demand.

PREVIOUS POST:
QE2: In the Currency Game, How do You Play With a Cheater?
NEXT POST:
Global Aluminum Supply at Odds With Bullish Price Run