Palladium Still on the Rise

Just a couple of months ago we posted a piece on palladium and quoted both an analysis and predictions made by Leon Westgate of Standard Bank calling out a price for palladium of $650/ounce. At the time, palladium was below $600/ounce where it bounced along until well into October.

True to form the palladium price surged higher in the intervening weeks and since last week’s announcement by the Fed of further Quantitative Easing, palladium has posted its strongest price in nine years, at one point rising 5% according to a FT article, before falling back a little on the day.

Having accurately forecast the rise to $650 per ounce we thought it would be interesting to see where the bank is predicting the price goes next. In a recent note to clients Mr. Westgate’s next target is $700, a level it nearly reached last week and looks likely to test again. Using the same predictive model of future demand as the September analysis, a review of automotive demand as the main driver to consumption and price was examined. US auto sales in October were better than expected at 12.25m annual clip (vs. the 11+m pace set previously) but it’s not just total car production that is important, it is the amount of PGM’s per car, which varies from market to market. The big four auto markets China, US, Europe and Japan are again represented on an updated version of the earlier graph weighted by the amount of palladium used per vehicle in the specific market. 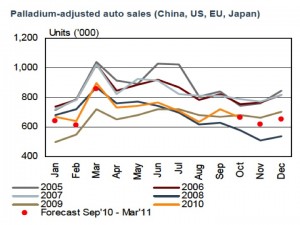 This palladium-adjusted auto sales number reveals that even though sales have been sluggish they have been strongest in those markets that are comparatively larger consumers of palladium rather than platinum, such as China. Consequently, investor interest in PGM’s as a hedge against inflation should favor palladium as the demand fundamentals appear firmer, adding both anti inflation to increasing demand as drivers to the price. Europe is the largest palladium consuming market but autos have been weak this year following the end of auto stimulus measures, however as the market gradually recovers this too will be seen as supportive for palladium next year. The bank expects a seasonal pick up in global auto sales towards year-end and went so far as to say their palladium-adjusted auto sales numbers could end the year closer to 2006/2007 levels. While the bank expects both palladium and platinum to head higher in the next six months, they favor palladium to platinum.