This first installment in the search for undervalued metals in wedding bands dovetails quite nicely with a recent post on palladium’s outlook.

Dips and dives in the auto industry, the largest end-user of platinum and palladium, are key considerations when looking at prices. Especially important is keeping an eye on whether profits will be rising or falling. How well auto companies do in the next few quarters, and where auto demand will be, should give us a sense of where palladium is headed.

According to the U.S. Geological Survey’s 2009 and 2010 Mineral Commodities Summaries, American auto manufacturers are continuing to practice “thrifting, which results in lower amounts of platinum in autocatalysts. Also, this leads to the assumption that “automobile manufacturers will continue to change PGMs ratios in gasoline-engine vehicles in favor of palladium, the USGS summary also states. In the past, only platinum had been used in diesel catalytic converters now, new technologies are allowing them to incorporate up to 25 percent palladium.

This shift from platinum to palladium, while good for palladium prices, is conversely harming the shorter-term platinum forecast, asserted a recent Bloomberg piece. Lagging demand coupled with no mining/production interruptions in South Africa has caused platinum’s value to under perform, writes Nicholas Larkin. (Contrary, certainly, to 2008, when platinum soared to an all-time high of $2,275 per ounce following a five-day shutdown of all South African mines, according to the USGS summaries.) For context, below is a 2-year historical graph of platinum prices: 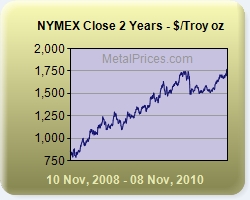 “Platinum production may exceed demand by 350,000 to 400,000 ounces this yearÂ¦by contrast, palladium will have a shortage of about 600,000 ounces, the first deficit since 2000, according to GFMS, a UK-based precious metals consultancy, Larkin notes in the Bloomberg article.

The fact that palladium prices are still less than half of platinum right now, and that we’re seeing increased interchangeability between the two in industrial uses in the manufacturing sector, support palladium’s case as a good investment for a wedding band.

Andrew Dunloy, an independent metalsmith and jewelry maker who used to work for Green Lake Jewelry Works, the largest custom jeweler in the Pacific Northwest, says that palladium is the way to go. “It will be getting big, he said in a phone interview. “It ages well and it has a lot of character and it’s still half the price of platinum, he continued.

Although physically lighter than platinum, palladium does not require plating, will not tarnish and is hypoallergenic. As an up-and-coming industrial commodity, palladium should continue to make waves in the jewelry sector.

“If it’s talked about in rap songs and music videos, it will definitely get some attention, Dunloy said.