Few banks have been as deeply involved in the iron ore and steel markets as Credit Suisse. The bank pioneered the introduction of iron ore swaps and remains one of the market leaders with deep insight into both the mining community and their steel producing customers. In a recent report to clients, CS provided an intriguing analysis of the steel market ostensibly for equity investors but which, as you will see, has much to commend reading by steel consumers. Refreshingly the report focuses on ex China demand looking at industrial production ex China, inventory levels, ISM new orders and both real and apparent steel demand. The analysis appears to focus on a few key indicators without deeper insight into the demand picture for key consuming industries such as construction or automotive but nevertheless has much to commend it in terms of similarities to previous recessionary cycles.

The bank started modeling apparent demand ex China at the height of the crisis in late 2008, and since then the model has predicted the trough of 2009, the peak in April 2010 and is forecasting the next trough as April 2011. From then onwards though the model is predicting rising demand through t0 2012. 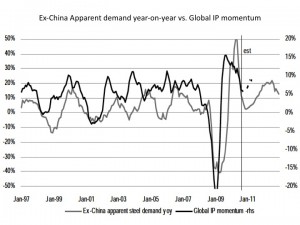 The graph above illustrates that the fall in apparent demand over the last 6 months or so has been significantly more dramatic than the real slow down in industrial production, that is apparent demand growth has undershot real demand growth by a considerable margin. Apparent consumption includes inventory build or de-stocking and so can often appear greater than underlying real consumption changes. Anyone involved in the market today will probably support that observation, end-user demand is not significantly down over early 2010 but prices have weakened and the supply chain is in caution mode.   The bank suggests this means that the real steel market is actually nothing like as bad as it seems and that if industrial production momentum picks up, the rebound in apparent steel consumption will be more dramatic than the real demand recovery. If the bank is right then through the middle-latter part of next year the steel market may feel very strong indeed. The bank makes the observation that the steel market is as driven by psychology as the equity markets. Acceleration in demand creates tension, which leads to the supply chain buying higher volumes and paying higher prices. Anyone involved in the distributor market will have seen this played out at times. Steel prices tend to trough before the trough in the demand cycle, and the bank suggests Q4/Q1 could be the trough this time around.

Looking back over 2010 there was what the bank terms a brief flurry of seasonal steel market activity heading into Q2 followed by a prolonged slowdown in demand that damaged sentiment among steel buyers killing off any chance of a prolonged up cycle. If they are right,   next year will see a demand recovery likely to lead to a far stronger sentiment in steel markets and sustained re-stocking in addition to real demand.

So far in 2010, the bank rightly observes there has been no meaningful re-stocking. The recovery in inventory has had more to do with the absence of the deep de-stocking in 2009 than a return to pre-crisis levels as the chart below from Credit Suisse illustrates. Absolute inventory in the US, Germany and Japan sits at the same pre-recovery level as the Asian crisis and 2003 within a year of these periods there was a fairly dramatic inventory build. These graphs show how in previous recessions the disconnect between inventory and new orders is most extreme as the economy comes out of the recessionary cycle. 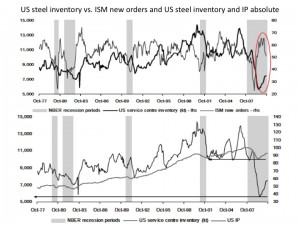 In fact a disproportionate share of the current inventory is down to Germany where real demand has been stronger and has given distributors the confidence to take on more inventory. 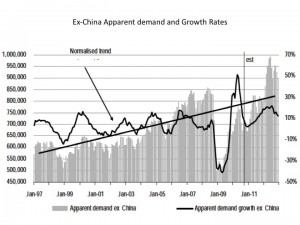 If the bank is correct then the output and demand dip we are seeing now will continue into 2011, followed by a seasonal pick up in Q2 and a real and apparent demand acceleration to the peak in Q2 2012.

What do you see in the market? Take our quick 4 question MetalMiner Steel Market Pulse Survey – results will appear tomorrow!